Ofloxacin is an antibiotic in a group of drugs called fluoroquinolones (flor-o-KWIN-o-lones). Ofloxacin fights bacteria in the body. Ofloxacin is used to treat bacterial infections of the skin, lungs, prostate, or urinary tract (bladder and kidneys).
Ofloxacin is also used to treat pelvic inflammatory disease and Chlamydia and/or gonorrhea. 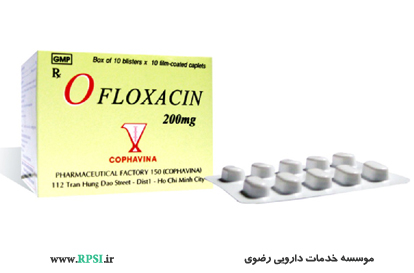 Ofloxacin acts on DNA gyrase and toposiomerase IV, enzymes which, like human topoisomerase, prevents the excessive supercoiling of DNA during replication or transcription.
By inhibiting their function, the drug thereby inhibits normal cell division.

Following oral administration, the bioavailability of Ofloxacin in the tablet formulation is approximately 98%. Maximum serum concentrations are achieved one to two hours after an oral doseProtein binding: 32%.
Metabolism: Hepatic. Elimination is mainly by renal excretion. Between 65% and 80% of an administered oral dose of ofloxacin is excreted unchanged via the kidneys within 48 hours of dosing. Four to eight percent of an ofloxacin dose is excreted in the feces.
This indicates a small degree of biliary excretion of ofloxacin. Half life: 9 hours.

1-Fluoroquinolones, including Ofloxacin, are associated with an increased risk of tendinitis and tendon rupture in all ages. This risk is further increased in older patients usually over 60 years of age, in patients taking corticosteroid drugs, and in patients with kidney, heart or lung transplants 2-Fluoroquinolones, including Ofloxacin, may exacerbate muscle weakness in persons with myasthenia gravis. Avoid Ofloxacin in patients with known history of myasthenia gravis.

1-to drink fluids liberally
2-that mineral supplements, vitamins with iron or minerals, calcium-, aluminum- or magnesium-based antacids, sucralfate or didanosine, chewable/buffered tablets or the pediatric powder for oral solution should not be taken within the two-hour period before or within the two-hour period after taking Ofloxacin
3-that diarrhea is a common problem caused by antibiotics which usually ends when the antibiotic is discontinued. Sometimes after starting treatment with antibiotics, patients can develop watery and bloody stools (with or without stomach cramps and fever) even as late as two or more months after having taken the last dose of the antibiotic. If this occurs, patients should contact their physician as soon as possible
4-to inform their physician of any personal or family history of QTc prolongation or proarrhythmic conditions such as hypokalemia, bradycardia, or recent myocardial ischemia; if they are taking any class IA (quinidine, procainamide), or class III (amiodarone, sotalol) antiarrhythmic agents. Patients should notify their physicians if they have any symptoms of prolongation of the QTc interval including prolonged heart palpitations or a loss of consciousness.