Oxazepam is a benzodiazepine. It works by affecting the brain to reduce nervous tension. Oxazepam is used for Treating anxiety. It may also be used to treat alcohol withdrawal. 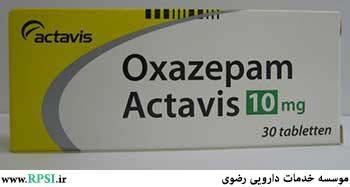 Similar to other benzodiazepines, oxazepam exerts its anxiolytic effects by potentiating the effect of gamma-aminobutyric acid (GABA) on GABA-A receptors through a cooperative mechanism of action.

Oxazepam is believed to stimulate GABA receptors in the ascending reticular activating system. Since GABA is inhibitory, receptor stimulation increases inhibition and blocks both cortical and limbic arousal following stimulation of the brain stem reticular formation.

Well absorbed from the gastrointestinal tract following oral administration however is absorbed at a slower rate compared to other benzodiazepines like diazepam or flurazepam. Time to peak concentration = 2-4 hours. Onset of action is slow, > 3 hours, following oral administration. Protein binding: 80-99%.No active metabolites. It is hepatically metabolized. This product has a single, major inactive metabolite in man, a glucuronide excreted in the urine. Mean elimination half-life - 8.2 hours.

1-Physical and Psychological Dependence may occure. Withdrawal symptoms have occurred following abrupt discontinuance of Oxazepam. 2-As with other CNS-acting drugs, patients should be cautioned against driving automobiles or operating dangerous machinery until it is known that they do not become drowsy or dizzy on Oxazepam therapy. 3-Patients should be warned that the effects of alcohol or other CNS-depressant drugs may be additive to those of Oxazepam, possibly requiring adjustment of dosage or elimination of such agents. 4-Although hypotension has occurred only rarely, Oxazepam should be administered with caution to patients in whom a drop in blood pressure might lead to cardiac complications. This is particularly true in the elderly patient.

1-To assure the safe and effective use of Oxazepam, patients should be informed that, since benzodiazepines may produce psychological and physical dependence, it is advisable that they consult with their physician before either increasing the dose or abruptly discontinuing this drug. 2-Safety and effectiveness in pediatric patients under 6 years of age have not been established. Absolute dosage for pediatric patients 6 to 12 years of age is not established.