Oxaliplatin is an antineoplastic. It works by killing cancer cells and slowing tumor growth Oxaliplatin is used for:Treating advanced cancer of the colon or rectum in certain patients. It is usually used in combination with other medicines 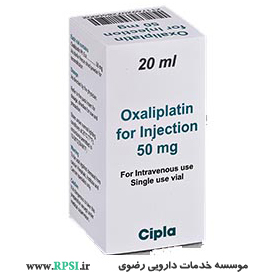 Oxaliplatin selectively inhibits the synthesis of deoxyribonucleic acid (DNA). The guanine and cytosine content correlates with the degree of Oxaliplatin-induced cross-linking. At high concentrations of the drug, cellular RNA and protein synthesis are also suppressed.

Bioavailability is complete following intravenous administration. When a single 2-hour intravenous infusion of oxaliplatin at a dose of 85 mg/m^2 is given, the peak serum concentration was 0.814 mcg/mL. volume of distribution: 440 L [single 2-hour IV infusion at dose of 85 mg/m^2] Plasma protein binding of platinum (active metabolite) is irreversible and is greater than 90%, primarily to albumin and gamma-globulins. It is also irreversibly binds to erythrocytes. Oxaliplatin undergoes rapid and extensive nonenzymatic biotransformation. The major route of platinum elimination is renal excretion.

1-Allergic Reactions: Grade 3/4 hypersensitivity, including anaphylactic/anaphylactoid reactions, to Oxaliplatin has been observed in 2 to 3% of colon cancer patients. 2-Neurologic Toxicity: Neuropathy: Oxaliplatin is associated with two types of neuropathy: An acute, reversible, primarily peripheral, sensory neuropathy that is of early onset, occurring within hours or one to two days of dosing, that resolves within 14 days, and that frequently recurs with further dosing.and A persistent (>14 days), primarily peripheral, sensory neuropathy that is usually characterized by paresthesias, dysesthesias, hypoesthesias, but may also include deficits in proprioception that can interfere with daily activities (e.g., writing, buttoning, swallowing, and difficulty walking from impaired proprioception). 3-Pulmonary Toxicity: Oxaliplatin has been associated with pulmonary fibrosis (<1% of study patients), which may be fatal. 4-Hepatotoxicity: Hepatotoxicity as evidenced in the adjuvant study, by increase in transaminases (57% vs. 34%) and alkaline phosphatase (42% vs. 20%) was observed more commonly in the Oxaliplatin combination arm than in the control arm. The incidence of increased bilirubin was similar on both arms. Changes noted on liver biopsies include: peliosis, nodular regenerative hyperplasia or sinusoidal alterations, perisinusoidal fibrosis, and veno-occlusive lesions. Hepatic vascular disorders should be considered, and if appropriate, should be investigated in case of abnormal liver function test results or portal hypertension, which cannot be explained by liver metastases

1-To expect side effects of Oxaliplatin Injection, USP, particularly its neurologic effects, both the acute, reversible effects and the persistent neurosensory toxicity. Patients should be informed that the acute neurosensory toxicity may be precipitated or exacerbated by exposure to cold or cold objects. 2-To avoid cold drinks, use of ice, and should cover exposed skin prior to exposure to cold temperature or cold objects. 3-Of the risk of low blood cell counts and to contact their physician immediately should fever, particularly if associated with persistent diarrhea, or evidence of infection develop. 4-To contact their physician if persistent vomiting, diarrhea, signs of dehydration, cough or breathing difficulties occur, or signs of allergic reaction appear. 5-To exercise caution when driving and using machines. No studies on the effects of the ability to operate cars and machines have been performed; however, Oxaliplatin treatment resulting in an increase risk of dizziness, nausea and vomiting, and other neurologic symptoms that affect gait and balance may lead to a minor or moderate influence on the ability to drive and use machines. 6-Of the potential effects of vision abnormalities, in particular transient vision loss (reversible following therapy discontinuation), which may affect patients' ability to drive and use machines.