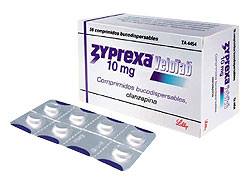 The mechanism of action of olanzapine, as with other drugs having efficacy in schizophrenia, is unknown. However, it has been proposed that this drug's efficacy in schizophrenia is mediated through a combination of dopamine and serotonin type 2 (5HT2) antagonism. The mechanism of action of olanzapine in the treatment of acute manic or mixed episodes associated with bipolar I disorder is unknown.

Olanzapine is well absorbed and reaches peak concentrations in approximately 6 hours following an oral dose. It is eliminated extensively by first pass metabolism, with approximately 40% of the dose metabolized before reaching the systemic circulation. Food does not affect the rate or extent of olanzapine absorption.

1-INCREASED MORTALITY IN ELDERLY PATIENTS WITH DEMENTIA-RELATED PSYCHOSIS Elderly patients with dementia-related psychosis treated with antipsychotic drugs are at an increased risk of death. 2-The possibility of a suicide attempt is inherent in schizophrenia and in bipolar I disorder, and close supervision of high-risk patients should accompany drug therapy 3-A potentially fatal symptom complex sometimes referred to as Neuroleptic Malignant Syndrome (NMS) has been reported in association with administration of antipsychotic drugs, including olanzapine.

1-Patients starting treatment with olanzapine should undergo fasting blood glucose testing at the beginning of treatment and periodically during treatment. 2-Take without regard to meals.