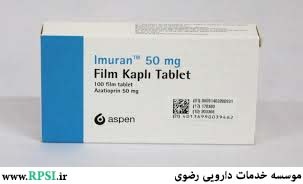 Azathioprine antagonizes purine metabolism and may inhibit synthesis of DNA, RNA, and proteins. It may also interfere with cellular metabolism and inhibit mitosis. Its mechanism of action is likely due to incorporation of thiopurine analogues into the DNA structure, causing chain termination and cytotoxicity.

Azathioprine is a chemotherapy drug, now rarely used for chemotherapy but more for immunosuppression in organ transplantation and autoimmune disease such as rheumatoid arthritis or inflammatory bowel disease or Crohn's disease.

Pregnancy , hypersensitivity to drug or its components. , previously treated with alkylating agents

1-Patients receiving immunosuppressants, including Azathioprine, are at increased risk of developing lymphoma and other malignancies, particularly of the skin. 2-Severe leukopenia, thrombocytopenia, anemias including macrocytic anemia, and/or pancytopenia may occur in patients being treated with Azathioprine. Severe bone marrow suppression may also occur. 3-Patients receiving immunosuppressants, including Azathioprine, are at increased risk for bacterial, viral, fungal, protozoal, and opportunistic infections, including reactivation of latent infections. These infections may lead to serious, including fatal outcomes. 4-A gastrointestinal hypersensitivity reaction characterized by severe nausea and vomiting has been reported. Symptoms of gastrointestinal toxicity most often develop within the first several weeks of therapy with Azathioprine and are reversible upon discontinuation of the drug.

1-Patients being started on Azathioprine should be informed of the necessity of periodic blood counts while they are receiving the drug and should be encouraged to report any unusual bleeding or bruising to their physician. 2-Careful dosage instructions should be given to the patient, especially when Azathioprine is being administered in the presence of impaired renal function or concomitantly with allopurinol.