Irinotecan is an antineoplastic agent . It works by interfering with the production of proteins necessary for cancer cell growth and reproduction. 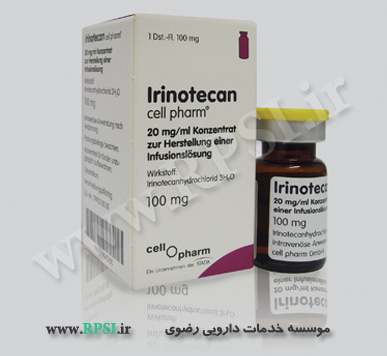 Irinotecan is a derivative of camptothecin. Camptothecins interact specifically with the enzyme topoisomerase I, which relieves torsional strain in DNA by inducing reversible single-strand breaks .

Irinotecan and its active metabolite SN-38 bind to the topoisomerase I-DNA complex and prevent religation of these single-strand breaks. Current research suggests that the cytotoxicity of Irinotecan is due to double-strand DNA damage produced during DNA synthesis when replication enzymes interact with the ternary complex formed by topoisomerase I, DNA, and either Irinotecan or SN-38. Mammalian cells cannot efficiently repair these doublestrand breaks.

After intravenous infusion of Irinotecan in humans, Irinotecan plasma concentrations decline in a multiexponential manner, with a mean terminal elimination half-life of about 6 to 12 hours.Irinotecan exhibits moderate plasma protein binding (30% to 68% bound). SN-38 is highly bound to human plasma proteins (approximately 95% bound).
Irinotecan is subject to extensive metabolic conversion by various enzyme systems, including esterases to form the active metabolite SN-38 and UGT1A1 mediating glucuronidation of SN-38 to form the inactive glucuronide metabolite SN-38G. The urinary excretion of Irinotecan is 11% to 20%; SN-38, <1%; and SN-38 glucuronide, 3%.

 Early diarrhea (occurring during or shortly after infusion of Irinotecan hydrochloride injection) is usually transient and infrequently severe.
 It may be accompanied by cholinergic symptoms of rhinitis, increased salivation, miosis, lacrimation, diaphoresis, flushing, and intestinal hyperperistalsis that can cause abdominal cramping.
 Bradycardia may also occur. Early diarrhea and other cholinergic symptoms may be prevented or treated.
 Deaths due to sepsis following severe neutropenia have been reported in patients treated with Irinotecan hydrochloride injection.
 Hypersensitivity reactions including severe anaphylactic or anaphylactoid reactions have been observed. Discontinue Irinotecan hydrochloride injection if anaphylactic reaction occurs.
 Renal impairment and acute renal failure have been identified, usually in patients who became volume depleted from severe vomiting and/or diarrhea.
 Interstitial Pulmonary Disease (IPD)-like events, including fatalities, have occurred in patients receiving Irinotecan (in combination and as monotherapy).
 Risk factors include pre-existing lung disease, use of pneumotoxic drugs, radiation therapy, and colony stimulating factors.
 Irinotecan hydrochloride injection can cause fetal harm when administered to a pregnant woman.

Tell your doctor or pharmacist if you have any medical conditions, especially if any of the following apply to you:
• if you are pregnant, planning to become pregnant, or are breast-feeding
• if you are taking any prescription or nonprescription medicine, herbal preparation, or dietary supplement
• if you have allergies to medicines, foods, or other substances
• if you have liver disease; a blood disorder; bone marrow depression; diabetes or high blood sugar; kidney or lung disease; or herpes zoster, varicella, or another infection; or you cannot tolerate fructose
• if you have recently received or will be receiving a live vaccine (eg, measles, mumps)
• if you have recently had or will be having dental procedures or radiation therapy
Drink plenty of water and other clear liquids while using irinotecan .
If you miss a dose of irinotecan, contact your doctor right away.