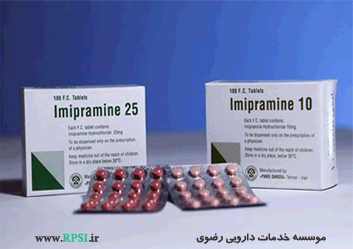 The mechanism of action of Imipramine Hydrochloride is not definitely known. However, it does not act primarily by stimulation of the central nervous system. The clinical effect is hypothesized as being due to potentiation of adrenergic synapses by blocking uptake of norepinephrine at nerve endings. The mode of action of the drug in controlling childhood enuresis is thought to be apart from its antidepressant effect.

Rapidly and well absorbed after oral administration. Bioavailability is approximately 43%. Peak plasma concentrations usually attained 1 - 2 hours following oral administration. Absorption is unaffected by food. Protein binding:60-95% Exclusively metabolized by the liver Approximately 40% of an orally administered dose is eliminated in urine within 24 hours, 70% in 72 hours. Small amounts are eliminated in feces via the biliary elimination. Half life: Imipramine - 8-20 hours; Desipramine (active metabolite) - up to 125 hours

1-Antidepressants increased the risk compared to placebo of suicidal thinking and behavior (suicidality) in children, adolescents, and young adults in short-term studies of major depressive disorder (MDD) and other psychiatric disorders 2- It should be noted that Imipramine Hydrochloride is not approved for use in treating bipolar depression.

1-Patients, their families, and their caregivers should be encouraged to be alert to the emergence of anxiety, agitation, panic attacks, insomnia, irritability, hostility, aggressiveness, impulsivity, akathisia (psychomotor restlessness), hypomania, mania, other unusual changes in behavior, worsening of depression, and suicidal ideation, especially early during antidepressant treatment and when the dose is adjusted up or down. Avoid alcohol. Avoid excessive quantities of coffee or tea (caffeine).