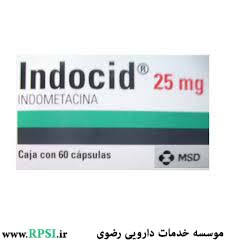 Although the exact mechanism of action through which indomethacin causes closure of a patent ductus arteriosus is not known, it is believed to be through inhibition of prostaglandin synthesis.

Indomethacin, a NSAIA, with analgesic and antipyretic properties exerts its pharmacological effects by inhibiting the synthesis of prostaglandins involved in pain, fever, and inflammation.

Usual Adult Dose for Ankylosing Spondylitis Immediate-release: 25 mg orally every 8 to 12 hours. Dosage may be increased by 25 or 50 mg increments every week to a maximum daily dose of 150 to 200 mg. Give with food, immediately after meals, or with antacids to reduce gastric irritation. Extended-release: 75 mg orally once a day. Dosage may be increased to 75 mg orally twice a day. Rectal: 50 mg rectally every 8 to 12 hours.

1-minor gastrointestinal bleeding (i.e., chemical detection of blood in the stool) was more commonly noted in those neonates treated with indomethacin. Severe gastrointestinal effects have been reported in adults with various arthritic disorders treated chronically with oral indomethacin. 2-Prematurity per se, is associated with an increased incidence of spontaneous intraventricular hemorrhage. Because indomethacin may inhibit platelet aggregation, the potential for intraventricular bleeding may be increased. 3-(Indomethacin) may mask the usual signs and symptoms of infection.

1-Severe hepatic reactions have been reported in adults treated chronically with oral indomethacin for arthritic disorders 2-The drug should be administered carefully to avoid extravascular injection or leakage as the solution may be irritating to tissue. 3-If indomethacin is used in pediatric patients 2 years of age or older, such patients should be monitored closely and periodic assessment of liver function is recommended. 4-Safety and effectiveness have not been established in pediatric patients less than 14 years of age.