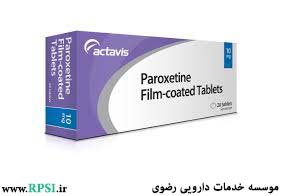 paroxetine is a potent and highly selective inhibitor of neuronal serotonin reuptake. Paroxetine likely inhibits the reuptake of serotonin at the neuronal membrane.

Paroxetine, an antidepressant drug of the selective serotonin reuptake inhibitor (SSRI) type, has no active metabolites and has the highest specificity for serotonin receptors of all the SSRIs.

Paroxetine hydrochloride is slowly, but completely absorbed following oral administration. Paroxetine distributes throughout the body, including the central nervous system, with only 1% remaining in the plasma. ~ 95% bound to plasma proteins. Paroxetine is extensively metabolized after oral administration, likely in the liver. Approximately 64% of a 30 mg oral solution of paroxetine was excreted in the urine with 2% as the parent compound and 62% as metabolites. Approximately 36% of the dose was excreted in the feces (via bile), mostly as metabolites and less than 1% as parent compound. Half life: 21-24 hours.

1- Patients with major depressive disorder (MDD), both adult and pediatric, may experience worsening of their depression and/or the emergence of suicidal ideation and behavior (suicidality) or unusual changes in behavior 2- Paroxetine tablets are not approved for use in treating bipolar depression. 3- The development of a potentially life-threatening serotonin syndrome has been reported with SNRIs and SSRIs, including Paroxetine. 4- Paroxetine tablets should be used cautiously in patients with a history of mania.

1- It should be discontinued in any patient who develops seizures. 2- Hyponatremia may occur as a result of treatment with SSRIs and SNRIs, including Paroxetine. In many cases, this hyponatremia appears to be the result of the syndrome of inappropriate antidiuretic hormone secretion (SIADH) 3- Patients should be cautioned about the risk of bleeding associated with the concomitant use of Paroxetine and NSAIDs, aspirin, or other drugs that affect coagulation.