Prasugrel is a platelet aggregation inhibitor. It works by slowing or stopping platelets from clumping together to form clots. 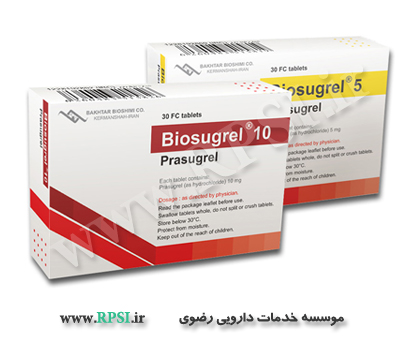 • Bleeding : May cause significant, sometimes fatal, bleeding. Do not use prasugrel in patients with active pathological bleeding or a history of TIA or stroke.
Additional risk factors for bleeding include body weight <60 kg, propensity to bleed (eg, recent trauma, recent surgery, recent or recurrent GI bleeding, active peptic ulcer disease, severe hepatic impairment, or moderate to severe renal impairment), and concomitant use of medications that increase the risk of bleeding (eg, warfarin, heparin, fibrinolytic therapy, long-term use of NSAIDs).
Suspect bleeding in any patient who is hypotensive and has recently undergone coronary angiography, PCI, CABG, or other surgical procedures in the setting of prasugrel.
If possible, manage bleeding without discontinuing prasugrel. Discontinuing prasugrel, particularly in the first few weeks after ACS, increases the risk of subsequent cardiovascular events. Management of bleeding episodes includes the use of PRBCs and platelet transfusion.
• Hypersensitivity : Hypersensitivity, including angioedema, has been reported, including in patients with a previous history of thienopyridine hypersensitivity.
Because of structural similarities, cross-reactivity is possible among the thienopyridines (clopidogrel, prasugrel, and ticlopidine); use with caution or avoid in patients with previous history of thienopyridine hypersensitivity. Use of prasugrel is contraindicated in patients with hypersensitivity (eg, anaphylaxis) to prasugrel .
• Thrombotic thrombocytopenic purpura (TTP) : Cases of TTP (usually occurring within the first 2 weeks of therapy), resulting in some fatalities, have been reported with prasugrel; urgent plasmapheresis is required.
• GI disease : Use with caution in patients with recent or recurrent GI bleeding or active peptic ulcer disease (patients are generally at higher risk of bleeding).
• Hepatic impairment : Use with caution in patients with severe hepatic impairment (patients are generally at higher risk of bleeding).
• Renal impairment : Use with caution in patients with moderate to severe renal impairment (patients are generally at higher risk of bleeding).
• Elderly : In patients ≥75 years, use is generally not recommended due to increased risk of fatal and intracranial bleeding and uncertain benefit, except in high-risk situations (patients with diabetes or a history of MI) in which its effect appears to be greater and its use may be considered.
• Drug discontinuation : Discontinue therapy for active bleeding, elective surgery, stroke, or TIA; reinitiate therapy as soon as possible unless patient suffers stroke or TIA where subsequent use is contraindicated; if possible, manage bleeding without discontinuing therapy since premature discontinuation of treatment may cause increased risk for cardiac adverse events; lapses in treatment should be avoided.

Tell your doctor or pharmacist if you have any medical conditions, especially if any of the following apply to you :
• if you are pregnant, planning to become pregnant, or are breast-feeding
• if you are taking any prescription or nonprescription medicine, herbal preparation, or dietary supplement
• if you have allergies to medicines, foods, or other substances
• if you have had a severe allergic reaction (eg, severe rash, hives, difficulty breathing, dizziness) to any other thienopyridine (eg, clopidogrel)
• if you have diabetes, liver problems, or kidney problems
• if you have a history of heart attack, stomach or bowel problems (eg, bleeding, ulcers, polyps, diverticulosis), easy or persistent bleeding, or recent injury or surgery
• if you will be having surgery (including dental surgery)
• if you weigh less than 132 lbs (60 kg)
Take prasugrel by mouth with or without food.
Do not break prasugrel before you swallow it.
If you miss a dose of prasugrel , take it as soon as possible. If it is almost time for your next dose, skip the missed dose and go back to your regular dosing schedule. Do not take 2 doses at once unless your doctor tells you to.