Pantoprazole is a proton pump inhibitor that decreases the amount of acid produced in the stomach. Pantoprazole is used to treat erosive esophagitis (damage to the esophagus from stomach acid), and other conditions involving excess stomach acid such as Zollinger-Ellison syndrome. Pantoprazole is not for immediate relief of heartburn symptoms. 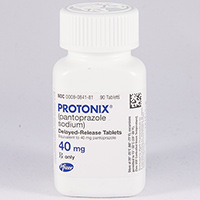 Pantoprazole is a proton pump inhibitor (PPI) that suppresses the final step in gastric acid production by forming a covalent bond to two sites of the (H+,K+ )- ATPase enzyme system at the secretory surface of the gastric parietal cell

Pantoprazole is a substituted benzimidazole indicated for the short-term treatment . Pantoprazole is a proton pump inhibitor (PPI) that suppresses the final step in gastric acid production.

Pantoprazole is well absorbed. It undergoes little first-pass metabolism resulting in an absolute bioavailability of approximately 77%.Protein binding: 98%.Pantoprazole is extensively metabolized in the liver through the cytochrome P450 (CYP) system. After administration of a single intravenous dose of 14C-labeled pantoprazole to healthy, normal metabolizer subjects, approximately 71% of the dose was excreted in the urine with 18% excreted in the feces through biliary excretion. Half life: 1 hour.

1-Symptomatic response to therapy with Pantoprazole does not preclude the presence of gastric malignancy.
2-Atrophic gastritis has been noted occasionally in gastric corpus biopsies from patients treated long-term with Pantoprazole.
3-Acute interstitial nephritis has been observed in patients taking PPIs including Pantoprazole.
4-Daily treatment with any acid-suppressing medications over a long period of time (e.g., longer than 3 years) may lead to malabsorption of cyanocobalamin (vitamin B-12) caused by hypo-or achlorhydria

• Take without regard to meals.