Trazodone is an antidepressant medicine. It affects chemicals in the brain that may become unbalanced and cause depression.Trazodone is used to treat major depressive disorder. 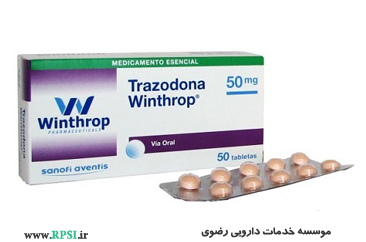 The mechanism of Trazodone’s antidepressant action is not fully understood, but is thought to be related to its potentiation of serotonergic activity in the CNS.

Preclinical studies have shown that Trazodone selectively inhibits neuronal reuptake of serotonin and acts as an antagonist at 5-HT-2A/2C serotonin receptors. Trazodone is not a monoamine oxidase inhibitor and, unlike amphetamine-type drugs, does not stimulate the central nervous system. Trazodone antagonizes alpha 1-adrenergic receptors, a property which may be associated with postural hypotension.

Trazodone hydrochloride is well absorbed after oral administration without selective localization in any tissue. Trazodone is extensively metabolized in liver to an active metabolite, m-chlorophenylpiperazine (mCPP) by CYP3A4. Trazodone is 89 to 95% protein bound. less than 1% of an oral dose is excreted unchanged in the urine. Approximately 70-75% of the dose is eliminated in urine with the remainder being excreted in feces via biliary elimination.

hypersensitivity to drug or its components. , Concomitant with MAOIs

1-Patients with major depressive disorder (MDD), both adult and pediatric, may experience worsening of their depression and/or the emergence of suicidal ideation and behavior (suicidality) or unusual changes in behavior. 2-The development of a potentially life-threatening serotonin syndrome or neuroleptic malignant syndrome (NMS)-like reactions have been reported with antidepressants. 3-Trazodone hydrochloride tablets are not approved for use in treating bipolar depression. 4-Trazodone is known to prolong the QT/QTc interval. 5-Trazodone hydrochloride is not recommended for use during the initial recovery phase of myocardial infarction. 6-patients should be cautioned about potential risk of bleeding associated with the concomitant use of Trazodone and NSAIDs, aspirin, or other drugs that affect coagulation or bleeding. 7-Rare cases of priapism (painful erections greater than 6 hours in duration) were reported in men receiving Trazodone. 8-Hyponatremia may occur as a result of treatment with antidepressants. In many cases, this hyponatremia appears to be the result of the syndrome of inappropriate antidiuretic hormone secretion (SIADH). 9-Trazodone hydrochloride tablets may cause somnolence or sedation and may impair the mental and/or physical ability required for the performance of potentially hazardous task 10-The pupillary dilation that occurs following use of many antidepressant drugs including Trazodone hydrochloride may trigger an angle closure attack in a patient with anatomically narrow angles who does not have a patent iridectomy

1-The following symptoms should be reported to the physician: anxiety, agitation, panic attacks, insomnia, irritability, hostility, aggressiveness, impulsivity, akathisia, hypomania and mania. 2-They should inform their physician if they have a history of bipolar disorder, cardiac disease or myocardial infarction. 3-There is a potential for hypotension, including orthostatic hypotension and syncope. 4-Withdrawal symptoms including anxiety, agitation and sleep disturbances, have been reported with Trazodone. Clinical experience suggests that the dose should be gradually reduced. 5-Trazodone should be taken shortly after a meal or light snack.