Tramadol is a syntheticnarcotic-like pain reliever of the benzenoid class . In body it is metabolized to O-desmethyltramadol, which is more potent opioid.
Tramadol is used to treat moderate to severe pain .
The extended-release form of tramadol is for around-the-clock treatment of pain. 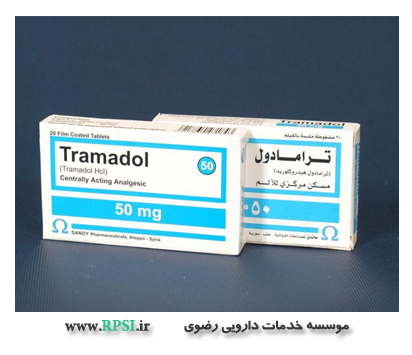 A centrally acting synthetic opioid analgesic. Although its mode of action is not completely understood, from animal tests, at least two complementary mechanisms appear applicable: binding of parent and M1 metabolite to µ-opioid receptors and weak inhibition of reuptake of norepinephrine and serotonin.
Opioid activity is due to both low affinity binding of the parent compound and higher affinity binding of the O-demethylated metabolite M1 to µ-opioid receptors. In animal models, M1 is up to 6 times more potent than tramadol in producing analgesia and 200 times more potent in µ-opioid binding. The relative contribution of both tramadol and M1 to human analgesia is dependent upon the plasma concentrations of each compound.

Tramadol has been shown to inhibit reuptake of norepinephrine and serotonin in vitro, as have some other opioid analgesics. These mechanisms may contribute independently to the overall analgesic profile of tramadol. The relationship between exposure of tramadol and M1 and efficacy has not been evaluated in clinical studies.
Apart from analgesia, tramadol administration may produce a constellation of symptoms (including dizziness, somnolence, nausea, constipation, sweating and pruritus) similar to that of other opioids. In contrast to morphine, tramadol has not been shown to cause histamine release. At therapeutic doses, tramadol has no effect on heart rate, left ventricular function or cardiac index.

hypersensitivity to drug or its components. , status asthmaticus

You should not take tramadol if you are allergic to it, or if you have:
• severe asthma or breathing problems;
• a blockage in your stomach or intestines;
• if you have recently used alcohol, sedatives, tranquilizers, or narcotic medications; or
• if you have used an MAO inhibitor in the past 14 days (such as isocarboxazid, linezolid, methylene blue injection, phenelzine, rasagiline, selegiline, or tranylcypromine).
• Tramadol should not be given to a child younger than 12 years old.
• Do not give tramadol to anyone younger than 18 years old who recently had surgery to remove the tonsils or adenoids.
• If you use tramadol while you are pregnant, your baby could become dependent on the drug. Tell your doctor if you are pregnant or plan to become pregnant.
• Do not breast-feed while taking tramadol. This medicine can pass into breast milk and cause drowsiness, breathing problems, or death in a nursing baby.

• Tramadol may be taken with or without food.
• The long-acting formulation must be swallowed whole; do not crush or chew as you may receive a dangerous or fatal dose. Extended-release tramadol capsules are intended to be taken only once a day. Do not increase the dosage of tramadol unless your doctor has advised you to do so.
• Tramadol May make you sleepy and affect your ability to drive or operate machinery. Refrain from driving or potentially hazardous tasks until you are sure tramadol is not having this effect.
• Avoid alcohol. Alcohol may enhance the side effects of tramadol and increase the risk of seizures.
• Can cause nausea. Taking an antiemetic (anti-sickness medicine) with tramadol can counteract this effect. Starting treatment with low doses or taking with food may also help to lessen nausea.
• If you have been taking tramadol for long periods of time, do not stop it suddenly. Your doctor will advise you the best way to taper down the dosage over several weeks.
• Tell a doctor immediately if you experience an allergic reaction to tramadol , excessive sweating , feel agitated or confused, develop a fever or diarrhea, find it difficult to control your limbs, or notice spasmodic jerky contractions of your muscles.
• Keep out of reach of children and pets. Keep your medicine in a safe, private storage area, out of view of any person that may illegally misuse it.
• Do not use if pregnant or breastfeeding unless specifically recommended by your doctor.