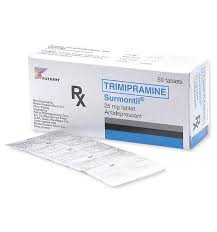 Trimipramine maleate capsules are an antidepressant with an anxiety-reducing sedative component to its action.

1-Antidepressants increased the risk compared to placebo of suicidal thinking and behavior (suicidality) in children, adolescents, and young adults in short-term studies of major depressive disorder (MDD) and other psychiatric disorders. 2-It should be noted that trimipramine maleate capsules are not approved for use in treating bipolar depression. 3-The pupillary dilation that occurs following use of many antidepressant drugs including trimipramine maleate capsules may trigger an angle closure attack in a patient with anatomically narrow angles who does not have a patent iridectomy.

1-Trimipramine maleate capsules should be used with caution in patients with impaired liver function 2-Patients, their families, and their caregivers should be encouraged to be alert to the emergence of anxiety, agitation, panic attacks, insomnia, irritability, hostility, aggressiveness, impulsivity, akathisia (psychomotor restlessness), hypomania, mania, other unusual changes in behavior, worsening of depression, and suicidal ideation, especially early during antidepressant treatment and when the dose is adjusted up or down