Topotecan is a cancer medicine that interferes with the growth and spread of cancer cells in the body. Topotecan is used to treat ovarian cancer, small cell lung cancer, and certain types of cervical cancer. 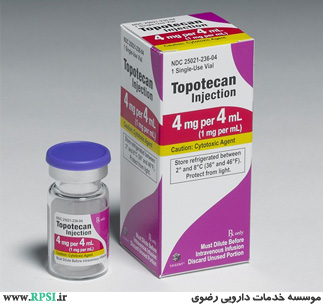 Topotecan, a semi-synthetic derivative of camptothecin (a plant alkaloid obtained from the Camptotheca acuminata tree), is an anti-tumor drug with topoisomerase I-inhibitory activity similar to irinotecan.

Topotecan is rapidly absorbed with peak plasma concentrations occurring between 1 to 2 hours following oral administration. The oral bioavailability of topotecan is approximately 40%. Binding of topotecan to plasma proteins is approximately 35%.Topotecan undergoes a reversible pH-dependent hydrolysis of its lactone moiety; In the urine, 20% of the orally administered dose was excreted as total topotecan and 2% was excreted as N-desmethyl topotecanFecal elimination of total topotecan accounted for 33%

1-Bone marrow suppression (primarily neutropenia) is a dose-limiting toxicity of TOPOTECAN.
2-Diarrhea, including severe and life-threatening diarrhea requiring hospitalization, can occur during treatment with TopotecanCapsules.
3-Interstitial lung disease (ILD), including fatalities, has occurred with TOPOTECAN.

1-Advise patients on pregnancy planning and prevention
2-TopotecanCapsules can be given without regard to food.
3-Monitor peripheral blood counts frequently during treatment.