Rivaroxaban is an anticoagulant (blood thinner) that prevents the formation of blood clots. Rivaroxaban is used to prevent or treat a type of blood clot called deep vein thrombosis (DVT), which can lead to blood clots in the lungs (pulmonary embolism).
A DVT can occur after certain types of surgery. Rivaroxaban is also used in people with atrial fibrillation (a heart rhythm disorder) to lower the risk of stroke caused by a blood clot. 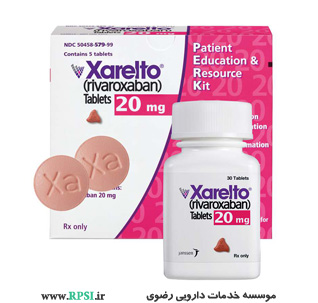 Inhibits platelet activation and fibrin clot formation via direct, selective and reversible inhibition of factor Xa (FXa) in both the intrinsic and extrinsic coagulation pathways.
FXa, as part of the prothrombinase complex consisting also of factor Va, calcium ions, factor II and phospholipid, catalyzes the conversion of prothrombin to thrombin.
Thrombin both activates platelets and catalyzes the conversion of fibrinogen to fibrin.

Rivaroxaban is an anticoagulant which binds directly to factor Xa. Thereafter, it effectively blocks the amplification of the coagulation cascade, preventing the formation of thrombus.

Following oral administration, rivaroxaban is rapidly absorbed and reaches peak plasma concentration in 2-4 hours. Bioavailability of the 10 mg dose is >80%. Plasma protein binding is about 92% to 95%. Metabolism: Hepatic via CYP3A4/5 and CYP2J2. Excretion: Urine (66% primarily via active tubular secretion [~36% as unchanged drug; 30% as inactive metabolites]); feces (28% [7% as unchanged drug; 21% as inactive metabolites]). Half-Life Elimination: Terminal: 5 to 9 hours; Elderly: 11 to 13 hours.

hypersensitivity to drug or its components. , active pathological bleeding

1- Have patient report immediately to prescriber signs of bleeding (vomiting blood or vomit that looks like coffee grounds, coughing up blood, blood in the urine, black, red, or tarry stools, bleeding from the gums, abnormal vaginal bleeding, bruises without a reason or that get bigger, or any bleeding that is very bad or that you cannot stop), severe dizziness, syncope, paresthesia, loss of strength or energy, a fall hitting head, illogical thinking, severe headache, wound site pain, edema, or new drainage
2- Food should be taken with the 15 mg and 20 mg tablet. Food increases the bioavailability of the 20 mg dose.