A broad-spectrum antibiotic that is being used as prophylaxis against disseminated Mycobacterium avium complex infection in HIV-positive patients. 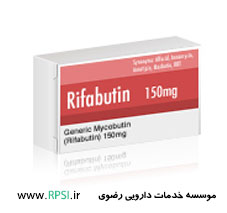 Rifabutin acts via the inhibition of DNA-dependent RNA polymerase in gram-positive and some gram-negative bacteria, leading to a suppression of RNA synthesis and cell death.

Rifabutin is an antibiotic that inhibits DNA-dependent RNA polymerase activity in susceptible cells. Specifically, it interacts with bacterial RNA polymerase but does not inhibit the mammalian enzyme. It is bactericidal and has a very broad spectrum of activity against most gram-positive and gram-negative organisms (including Pseudomonas aeruginosa) and specifically Mycobacterium tuberculosis.

Because of rapid emergence of resistant bacteria, use is restricted to treatment of mycobacterial infections and a few other indications. Rifabutin is well absorbed when taken orally and is distributed widely in body tissues and fluids, including the CSF.

This medicine may change the color of urine, stools, saliva, sweat, tears, and skin to a brown-orange color. This is normal and not harmful.

Birth control pills and other hormone-based birth control may not work as well to prevent pregnancy. Use some other kind of birth control also like a condom when taking rifabutin.

Take with or without food. Take with food if it causes an upset stomach.