Ranolazine is an antianginal medication. 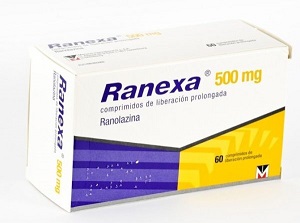 Ranolazine has antianginal and anti-ischemic effects that do not depend upon reductions in heart rate or blood pressure. It is the first new anti-anginal developed in over 20 years.

Bioavailability: 76%; absorption is highly variable but is unaffected by food

Intestine and liver (CYP3A4 and CYP2D6)

<18 years: Safety and efficacy not established

Not for acute anginal episodes

While ACS patients appear not to be at increased risk for proarrhythmia or sudden death, ranolazine has been shown to block I-Kr and cause dose-related QTc-interval prolongation

Causes small reductions in HbA1c in patients with diabetes; must not be considered a treatment for diabetes