Teriflunomide is the active metabolite of leflunomide, and it acts as an immunomodulatory agent by inhibiting pyrimidine synthesis and is indicated for the treatment of multiple sclerosis, specifically relapsing forms. 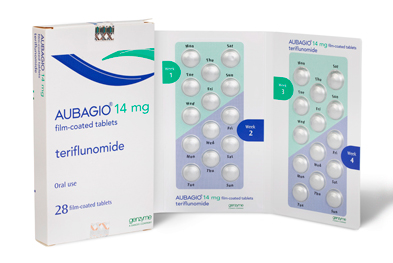 The exact mechanism by which teriflunomide acts in MS is not known. What is known is that teriflunomide prevents pyrimidine synthesis by inhibiting the mitochondrial enzyme dihydroorotate dehydrogenase, and this may be involved in its immunomodulatory effect in MS.

Teriflunomide is an immunomodulatory agent that decreases the amount of activated CNS lymphocytes, which results in anti-inflammatory and antiproliferative effects.

Indicated for treatment of relapsing forms of multiple sclerosis

pregnancy , Hypersensitivity to this drug or components

May take an average of 8 months to clear drug from plasma; consider accelerated elimination with cholestyramine or activated charcoal

Not recommended for patients with serious immunodeficiency; do not initiate treatment in patients with active acute or chronic infections

Peripheral neuropathy, including polyneuropathy and mononeuropathy have been reported; evaluate patient and consider discontinuing therapy

Use caution in hyperkalemia

Hepatotoxicity: severe liver injury including fatal liver failure has been reported with other drugs in class; monitor liver enzymes monthly for 6 months and discontinue if liver injury is suspected

Risk of teratogenicity: animal data shows major birth defects if used during pregnancy; exclude pregnancy before the start of therapy in females of reproductive potential; advise females of reproductive potential to use effective contraception during therapy and during an accelerated drug elimination procedure after therapy; stop therapy and use an accelerated drug elimination procedure if patient becomes pregnant contraindicated in women of child bearing potential who are not using reliable contraception

Follow all directions on your prescription label. Your doctor may occasionally change your dose to make sure you get the best results. Do not use teriflunomide in larger or smaller amounts or for longer than recommended.

You may take teriflunomide with or without food.

Your blood pressure will need to be checked often.

Teriflunomide can lower blood cells that help your body fight infections and help your blood to clot. Your blood will need to be tested often. Your teriflunomide treatment may be stopped for a short time based on the results of these tests.

After you stop taking teriflunomide, you may need to be treated with other medicines to help your body eliminate teriflunomide quickly. If you do not undergo this drug elimination procedure, teriflunomide could stay in your body for up to 2 years. Follow your doctor's instructions.

You will also need to go through this drug elimination procedure if you plan to become pregnant after you stop taking teriflunomide.