For the treatment of relapsed CLL, it is currently indicated as a second-line agent in combination with rituximab in patients for whom rituximab alone would be considered appropriate therapy due to other co-morbidities, while in the treatment of FL and SLL it is intended to be used in patients who have received at least two prior systemic therapies. 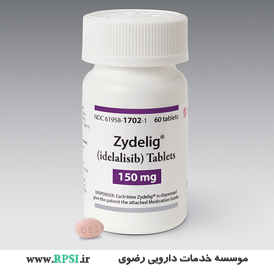 Idelalisib specifically inhibits P110δ, the delta isoform of the enzyme phosphatidylinositol-4,5-bisphosphate 3-kinase, also known as PI-3K. The PI-3Ks are a family of enzymes involved in cellular functions such as cell growth, proliferation, differentiation, motility, survival and intracellular trafficking, which in turn are involved in cancer.

In contrast to the other class IA PI3Ks p110α and p110β, p110δ is principally expressed in leukocytes (white blood cells) and is important for the function of T cells, B cell, mast cells and neutrophils. By inhibiting this enzyme, idelalisib induces apoptosis of malignant cells and inhibits several cell signaling pathways, including B-cell receptor (BCR) signaling and C-X-C chemokine receptors type 5 and type 4 signalling, which are involved in trafficking and homing of B-cells to the lymph nodes and bone marrow. Treatment of lymphoma cells with idelalisib has been shown to result in inhibition of chemotaxis and adhesion, and reduced cell viability

Protein binding: Idelalisib is greater than 84% bound to human plasma proteins with no concentration dependence.

Metabolism:Idelalisib is metabolized by aldehyde oxidase and CYP3A to its major metabolite GS-563117, which is inactive against P110δ. Idelalisib is also metabolized to a minor extent by UGT1A4.

Indicated, in combination with rituximab, for relapsed chronic lymphocytic leukemia (CLL) in patients for whom rituximab alone would be considered appropriate therapy due to other comorbidities

You may have more chance of getting an infection. Wash hands often. Stay away from people with infections, colds, or flu.

If you are 65 or older, use idelalisib with care. You could have more side effects.

This medicine may cause harm to the unborn baby if you take it while you are pregnant.

Use birth control that you can trust during treatment and for 1 month after treatment ends.

If you get pregnant while taking this medicine or within 1 month after your last dose, call your doctor right away.

Take with or without food.

Swallow whole. Do not chew, break, or crush.

To gain the most benefit, do not miss doses.

Keep taking this medicine as you have been told by your doctor or other health care provider, even if you feel well.