Ivacaftor is a drug used for the management of Cystic Fibrosis (CF) in patients aged 2 years and older. Cystic Fibrosis is an autosomal recessive disorder caused by one of several different mutations in the gene for the Cystic Fibrosis Transmembrane Conductance Regulator (CFTR) protein, an ion channel involved in the transport of chloride and sodium ions across cell membranes.

CFTR is active in epithelial cells of organs such as of the lungs, pancreas, liver, digestive system, and reproductive tract. Alterations in the CFTR gene result in altered production, misfolding, or function of the protein and consequently abnormal fluid and ion transport across cell membranes.

As a result, CF patients produce a thick, sticky mucus that clogs the ducts of organs where it is produced making patients more susceptible to complications such as infections, lung damage, pancreatic insufficiency, and malnutrition. 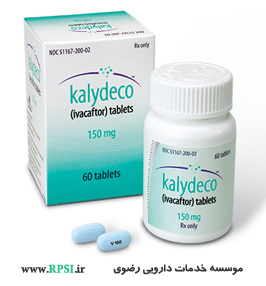 Ivacaftor exerts its effect by acting as a potentiator of the CFTR protein, an ion channel involved in the transport of chloride and sodium ions across cell membranes of the lungs, pancreas, and other organs. Alterations in the CFTR gene result in altered production, misfolding, or function of the protein and consequently abnormal fluid and ion transport across cell membranes.

Ivacaftor improves CF symptoms and underlying disease pathology by potentiating the channel open probability (or gating) of CFTR protein in patients with impaired CFTR gating mechanisms. The overall level of ivacaftor-mediated CFTR chloride transport is dependent on the amount of CFTR protein at the cell surface and how responsive a particular mutant CFTR protein is to ivacaftor potentiation.

Following administration of ivacaftor with fat containing foods, peak plasma concentrations were reached at 4 hours (Tmax) with a maximum concentration (Cmax) of 768 ng/mL and AUC of 10600 ng * hr/mL. It's recommended that ivacaftor should be taken with fat-containing foods as they increase absorption by approximately 2.5- to 4-fold [FDA Label].

Following oral administration, the majority of ivacaftor (87.8%) is eliminated in the feces after metabolic conversion.

Elevated transaminases (ALT or AST); evaluate liver enzymes before initiating and every 3 months for the first year of treatment, and then annually thereafter; consider more frequent monitoring for patients with a history of transaminase elevations; interrupt dose if ALT or AST increases to >5 times ULN

Ivacaftor and its M1 metabolite may inhibit CYP3A and P-gp; caution when coadministration with CYP3A and/or P-gp substrates

Cases of noncongenital lens opacities/cataracts have been reported in pediatric patients up to age 12 yr; although other risk factors were present in some cases (eg, corticosteroid use and/or exposure to radiation), a possible risk attributable to ivacaftor cannot be excluded; baseline and follow-up ophthalmological examinations are recommended in pediatric patients

For children 2 to 6 years old who take ivacaftor oral granules: Mix the granules with 1 teaspoon of liquid or soft food such as pudding, yogurt, applesauce, water, fruit juice, or milk. Mix only 1 dose at a time, and use the mixture within 1 hour after mixing. Then feed the child a high-fat food such as eggs, peanut butter, cheese, yogurt, or whole milk.

You will need frequent blood tests to check your liver function during treatment.

A child using this medicine may need frequent eye exams.