Caspofungin is an antifungal agent . It works by weakening fungal cell walls, which allows the cell contents to leak out, resulting in the death of the fungus. 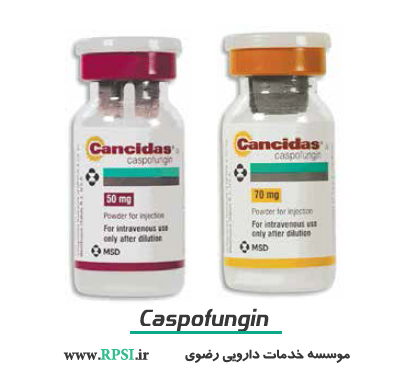 Caspofungin , an echinocandin, inhibits the synthesis of beta (1,3)-D-glucan , an essential component of the cell wall of susceptible Aspergillus species and Candida species

Distribution : Plasma concentrations of caspofungin decline in a polyphasic manner following single 1 hour intravenous infusions. A short α-phase occurs immediately postinfusion, followed by a β-phase (half-life of 9 to 11 hours) that characterizes much of the profile and exhibits clear log-linear behavior from 6 to 48 hours postdose during which the plasma concentration decreases 10-fold.
An additional, longer half-life phase, y-phase, (half-life of 40 to 50 hours), also occurs. Distribution, rather than excretion or biotransformation, is the dominant mechanism influencing plasma clearance .
Caspofungin is extensively bound to albumin (approximately 97%), and distribution into red blood cells is minimal. Mass balance results showed that approximately 92% of the administered radioactivity was distributed to tissues by 36 to 48 hours after a single 70 mg dose of [3H] caspofungin acetate. There is little excretion or biotransformation of caspofungin during the first 30 hours after administration.

Metabolism : Caspofungin is slowly metabolized by hydrolysis and N-acetylation. Caspofungin also undergoes spontaneous chemical degradation to an open-ring peptide compound, L-747969. At later time points (5 or more days postdose), there is a low level (7 or less picomoles/mg protein, or 1.3% or less of the administered dose) of covalent binding of radiolabel in plasma following single-dose administration of [3H] caspofungin acetate, which may be due to two reactive intermediates formed during the chemical degradation of caspofungin to L-747969.
Additional metabolism involves hydrolysis into constitutive amino acids and their degradates, including dihydroxyhomotyrosine and N-acetyl-dihydroxy homotyrosine. These two tyrosine derivatives are found only in urine, suggesting rapid clearance of these derivatives by the kidneys.

Excretion : Two single-dose radiolabeled pharmacokinetic studies were conducted. In one study, plasma, urine, and feces were collected over 27 days, and in the second study plasma was collected over 6 months. Plasma concentrations of radioactivity and of caspofungin were similar during the first 24 to 48 hours postdose ; thereafter drug levels fell more rapidly.
In plasma, caspofungin concentrations fell below the limit of quantitation after 6 to 8 days postdose, while radiolabel fell below the limit of quantitation at 22.3 weeks postdose. After single intravenous administration of [3H] caspofungin acetate, excretion of caspofungin and its metabolites in humans was 35% of dose in feces and 41% of dose in urine.
A small amount of caspofungin is excreted unchanged in urine (approximately 1.4% of dose). Renal clearance of parent drug is low (approximately 0.15 mL/min) and total clearance of caspofungin is 12 mL/min.

Hypersensitivity : Anaphylaxis has been reported during administration of caspofungin. If this occurs, discontinue caspofungin and administer appropriate treatment. Possible histamine-mediated adverse reactions, including rash, facial swelling, angioedema, pruritus, sensation of warmth or bronchospasm have been reported and may require discontinuation and/or administration of appropriate treatment.

Hepatic Effects : Laboratory abnormalities in liver function tests have been seen in healthy volunteers and in adult and pediatric patients treated with caspofungin. In some adult and pediatric patients with serious underlying conditions who were receiving multiple concomitant medications with caspofungin , isolated cases of clinically significant hepatic dysfunction, hepatitis, and hepatic failure have been reported; a causal relationship to caspofungin has not been established.
Monitor patients who develop abnormal liver function tests during caspofungin therapy for evidence of worsening hepatic function and evaluated for risk/benefit of continuing caspofungin therapy.

Elevated Liver Enzymes During Concimitant Use with Cyclosporine : Elevated liver enzymes have occurred in patients receiving caspofungin and cyclosporine concomitantly. Only use caspofungin and cyclosporine in those patients for whom the potential benefit outweighs the potential risk. Patients who develop abnormal liver enzymes during concomitant therapy should be monitored and the risk/benefit of continuing therapy should be evaluated.

Some medical conditions may interact with caspofungin . Tell your doctor or pharmacist if you have any medical conditions, especially if any of the following apply to you:
• if you are pregnant, planning to become pregnant, or are breast-feeding
• if you are taking any prescription or nonprescription medicine, herbal preparation, or dietary supplement
• if you have allergies to medicines, foods, or other substances
• if you have liver problems or are using cyclosporine

Some MEDICINES MAY INTERACT with caspofungin . Tell your health care provider if you are taking any other medicines, especially any of the following :
• Cyclosporine because the risk of liver problems may be increased
• Carbamazepine, dexamethasone, efavirenz, nevirapine, phenytoin, or rifampin because they may decrease caspofungin's effectiveness
• Tacrolimus because its effectiveness may be decreased by caspofungin