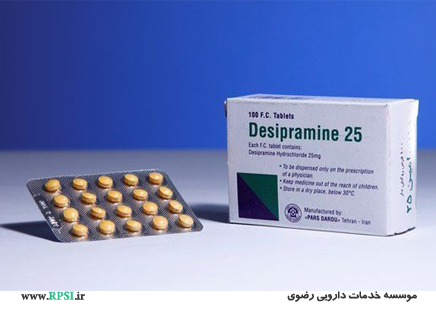 Desipramine, a secondary amine tricyclic antidepressant, is structurally related to both the skeletal muscle relaxant cyclobenzaprine and the thioxanthene antipsychotics such as thiothixene. It is the active metabolite of imipramine

1-Antidepressants increased the risk compared to placebo of suicidal thinking and behavior (suicidality) in children, adolescents, and young adults in short-term studies of major depressive disorder (MDD) and other psychiatric disorders. 2- It should be noted that Desipramine HCl is not approved for use in treating bipolar depression. 3-The pupillary dilation that occurs following use of many antidepressant drugs including Desipramine HCl may trigger an angle closure attack in a patient with anatomically narrow angles who does not have a patent iridectomy.

1-Extreme caution should be used when this drug is given in the following situations:cardiovascular disease,, a family history of sudden death, cardiac dysrhythmias, or cardiac conduction disturbances.,a history of urinary retention or glaucoma, a history of seizure disorder.