Efavirenz is a non-nucleoside reverse transcriptase inhibitor (NNRTI) and is used as part of highly active antiretroviral therapy (HAART) for the treatment of a human immunodeficiency virus (HIV) type 1. 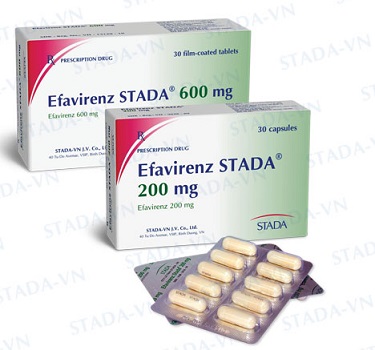 It is believed that inhibition of reverse transcriptase interferes with the generation of DNA copies of viral RNA, which, in turn, are necessary for synthesis of new virions. Intracellular enzymes subsequently eliminate the HIV particle that previously had been uncoated, and left unprotected, during entry into the host cell. Thus, reverse transcriptase inhibitors are virustatic and do not eliminate HIV from the body.

Human DNA polymerase is less susceptible to the pharmacologic effects of triphosphorylated efavirenz, this action may nevertheless account for some of the drug's toxicity.

Hepatic impairment; not recommended for patients with moderate or severe hepatic impairment because there are insufficient data to determine whether dose adjustment is necessary

Monitor liver function tests before and during treatment in patients with underlying hepatic disease, including hepatitis B or C coinfection, marked transaminase elevations, or who are taking medications associated with liver toxicity; among reported cases of hepatic failure, a few occurred in patients with no pre-existing hepatic disease; weigh risk/benefit if AST/ALT >5 xULN; discontinue therapy if elevation of serum transaminases is accompanied by clinical signs or symptoms of hepatitis or hepatic decompensation

Use caution in history of seizures

Total cholesterol and triglyceride elevations may occur; monitor before therapy and periodically thereafter

Women should avoid pregnancy; use 2 forms of contraception including a barrier method; postmarketing reports of contraceptive failure in patients on efavirenz while on an implantable hormonal contraceptive; avoid administration in first trimester of pregnancy as fetal harm may occur

Autoimmune disorders (eg, Graves’ disease, polymyositis, Guillain-Barré syndrome) reported in the setting of immune reconstitution, however, the time to onset is more variable, and can occur many months after initiation of treatment

Not for use as a single agent or add on as a sole agent to a failing regimen; consider potential for cross-resistance when choosing other agents

Not recommended with ATRIPLA, which contains efavirenz, emtricitabine, and tenofovir disoproxil fumarate, unless needed for dose adjustment when coadministered with rifampin

Children: If your child's weight changes, talk with the doctor. The dose of this medicine (efavirenz tablets) may need to be changed.