It is used as a resorbable, non-ionic contrast medium. 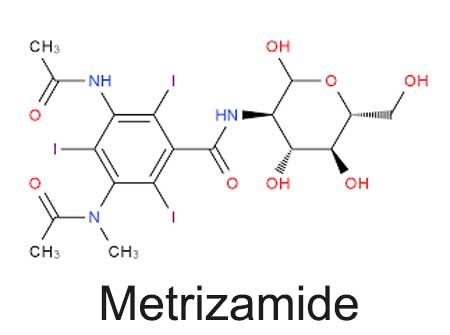 Organic iodine compounds such as metrizamide block x-rays as they pass through the body, thereby allowing body structures containing iodine to be delineated in contrast to those structures that do not contain iodine. The degree of opacity produced by these compounds is directly proportional to the total amount (concentration and volume) of the iodinated contrast agent in the path of the x-rays. After intrathecal administration into the subarachnoid space, diffusion of metrizamide in the CSF allows the visualization of the subarachnoid spaces of the head and spinal canal. After intravascular administration, metrizamide makes opaque those vessels in its path of flow, allowing visualization of the internal structures until significant hemodilution occurs.

Metrazamide also has some toxic effects which are thought to be due to its ability to inhibit glucose metabolism.