A component of neomycin that is produced by Streptomyces fradiae. Neomycin is a bactericidal aminoglycoside antibiotic that binds to the 30S ribosome of susceptible organisms. Binding interferes with mRNA binding and acceptor tRNA sites and results in the production of non-functional or toxic peptides. 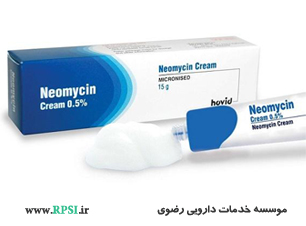 Aminoglycosides like neomycin "irreversibly" bind to specific 30S-subunit proteins and 16S rRNA. Specifically neomycin binds to four nucleotides of 16S rRNA and a single amino acid of protein S12. This interferes with decoding site in the vicinity of nucleotide 1400 in 16S rRNA of 30S subunit.

This region interacts with the wobble base in the anticodon of tRNA. This leads to interference with the initiation complex, misreading of mRNA so incorrect amino acids are inserted into the polypeptide leading to nonfunctional or toxic peptides and the breakup of polysomes into nonfunctional monosomes.

Neomycin is an aminoglycoside antibiotic. Aminoglycosides work by binding to the bacterial 30S ribosomal subunit, causing misreading of t-RNA, leaving the bacterium unable to synthesize proteins vital to its growth.

Aminoglycosides are useful primarily in infections involving aerobic, Gram-negative bacteria, such as Pseudomonas, Acinetobacter, and Enterobacter. In addition, some mycobacteria, including the bacteria that cause tuberculosis, are susceptible to aminoglycosides.

Infections caused by Gram-positive bacteria can also be treated with aminoglycosides, but other types of antibiotics are more potent and less damaging to the host.

Alternate dosing: 6 g/day orally divided every 4 hours for 2 to 3 days

The safety and efficacy of neomycin in children less than 18 years of age has not been established. However, the use of neomycin may be appropriate is some situations.