Hydrocodone is a synthetic opioid derivative of codeine.14 It is commonly used in combination with acetaminophen to control moderate to severe pain. Historically, hydrocodone has been used as a cough suppressant although this has largely been replaced by dextromethorphan in current cough and cold formulations. Hydrocodone's more potent metabolite, hydromorphone has also found wide use as an analgesic and is frequently used in cases of severe pain. 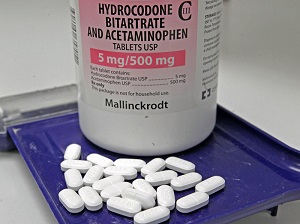 Hydrocodone binds to the mu opioid receptor (MOR) with the highest affinity followed by the delta opioid receptors (DOR).13 Hydrocodone's agonist effect at the MOR is considered to contribute the most to its analgesic effect

Hydrocodone inhibits pain signaling in both the spinal cord and brain 12. Its actions in the brain also produce euphoria, respiratory depression, and sedation

The liquid formulations of hydrocodone have a Tmax of 0.83-1.33 h.
Hydrocodone is 36% bound to plasma proteins
Hydrocodone undergoes oxidative O-demethylation to form hydromorphone, a more potent active metabolite
The half-life of elimination reported for hydrocodone is 7-9 h.

Antitussive
Hydrocodone is indicated for the management of acute pain, sometimes in combination with acetaminophen or ibuprofen, as well as the symptomatic treatment of the common cold and allergic rhinitis in combination with decongestants, antihistamines, and expectorants

The following dosing recommendations can only be considered suggested approaches to what is actually a series of clinical decisions over time; each patient should be managed individually.

Contraindications. Contraindications to hydrocodone/acetaminophen include patients who have severe respiratory depression, acute or significant bronchial asthma, gastrointestinal obstruction, and anaphylactic reactions due to components of the formula

Some side effects can be serious. If you experience any of these symptoms or those listed in the IMPORTANT WARNING or SPECIAL PRECAUTIONS sections, call your doctor immediately or get emergency medical treatment:

You should not use hydrocodone if you are allergic to it, or if you have:

To make sure hydrocodone is safe for you, tell your doctor if you have ever had:

If you use opioid medicine while you are pregnant, your baby could become dependent on the drug. This can cause life-threatening withdrawal symptoms in the baby after it is born. Babies born dependent on opioids may need medical treatment for several weeks.

Do not breastfeed while taking this medicine. Hydrocodone can pass into breast milk and cause drowsiness, breathing problems, or death in a nursing baby.