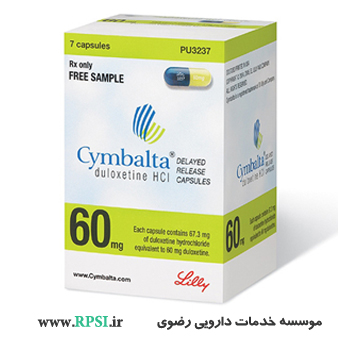 Orally administered duloxetine hydrochloride is well absorbed . The apparent volume of distribution averages about 1640 L.
Duloxetine is highly bound (>90%) to proteins in human plasma, binding primarily to albumin and α1-acid glycoprotein.
Metabolism: liver. Most (about 70%) of the duloxetine dose appears in the urine as metabolites of duloxetine; about 20% is excreted in the feces.

hypersensitivity to drug or its components. , Current or recent (within 2 weeks) therapy with MA , Concomitant with MAOIs

1-Patients with major depressive disorder (MDD), both adult and pediatric, may experience worsening of their depression and/or the emergence of suicidal ideation and behavior (suicidality) or unusual changes in behavior.
2- duloxetine is not approved for use in treating bipolar depression.
3-There have been reports of hepatic failure, sometimes fatal, in patients treated with duloxetine. These cases have presented as hepatitis with abdominal pain, hepatomegaly, and elevation of transaminase levels to more than twenty times the upper limit of normal with or without jaundice, reflecting a mixed or hepatocellular pattern of liver injury.
4-Orthostatic hypotension, falls and syncope have been reported with therapeutic doses of duloxetine.
5-The development of a potentially life-threatening serotonin syndrome has been reported with SNRIs and SSRIs, including duloxetine.
6-Patients should be cautioned about the risk of bleeding associated with the concomitant use of duloxetine and NSAIDs, aspirin, or other drugs that affect coagulation
7-Severe skin reactions, including erythema multiforme and Stevens-Johnson Syndrome (SJS), can occur with duloxetine.
8-duloxetine should be used cautiously in patients with a history of mania.
9- The pupillary dilation that occurs following use of many antidepressant drugs including duloxetine may trigger an angle closure attack in a patient with anatomically narrow angles who does not have a patent iridectomy.
10-Duloxetine has not been systematically evaluated in patients with a seizure disorder
11-Hyponatremia may occur as a result of treatment with SSRIs and SNRIs, including duloxetine. In many cases, this hyponatremia appears to be the result of the syndrome of inappropriate antidiuretic hormone secretion (SIADH)

1-Blood pressure should be measured prior to initiating treatment and periodically measured throughout treatment 2-Instruct patients that discontinuation of duloxetine may be associated with symptoms such as dizziness, headache, nausea, diarrhea, paresthesia, irritability, vomiting, insomnia, anxiety, hyperhidrosis, and fatigue, and should be advised not to alter their dosing regimen, or stop taking duloxetine without consulting their physician. 3-Duloxetine is in a class of medicines that may affect urination. Instruct patients to consult with their healthcare provider if they develop any problems with urine flow.