TCAs are potent inhibitors of serotonin and norepinephrine reuptake. In addition, TCAs down-regulate cerebral cortical β-adrenergic receptors and sensitize post-synaptic serotonergic receptors with chronic use. The antidepressant effects of TCAs are thought to be due to an overall increase in serotonergic neurotransmission. 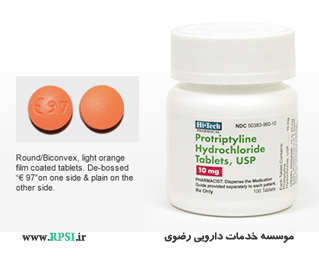 Increases the synaptic concentration of serotonin and/or norepinephrine in the central nervous system by inhibition of their reuptake by the presynaptic neuronal membrane.

It is now thought that changes occur in receptor sensitivity in the cerebral cortex and hippocampus. The hippocampus is part of the limbic system, a part of the brain involved in emotions. Presynaptic receptors are affected: α1 and β1 receptors are sensitized, α2 receptors are desensitised (leading to increased noradrenaline production). Tricyclics are also known as effective analgesics for different types of pain, especially neuropathic or neuralgic pain.

A precise mechanism for their analgesic action is unknown, but it is thought that they modulate anti-pain opioid systems in the CNS via an indirect serotonergic route. They are also effective in migraine prophylaxis, but not in abortion of acute migraine attack. The mechanism of their anti-migraine action is also thought to be serotonergic.

There are no dosage adjustments provided in the manufacturer's labeling.

There are no dosage adjustments provided in the manufacturer's labeling.

heart attack , Hypersensitivity to this drug or components

Suicidal thinking/behavior: Antidepressants increase the risk of suicidal thinking and behavior in children, adolescents, and young adults (18-24 years of age) with major depressive disorder (MDD) and other psychiatric disorders; consider risk prior to prescribing. Short-term studies did not show an increased risk in patients >24 years of age and showed a decreased risk in patients ≥65 years. Closely monitor patients for clinical worsening, suicidality, or unusual changes in behavior, particularly during the initial 1-2 months of therapy or during periods of dosage adjustments (increases or decreases. A medication guide concerning the use of antidepressants should be dispensed with each prescription.

CNS depression: May cause CNS depression, which may impair physical or mental abilities; patients must be cautioned about performing tasks that require mental alertness (eg, operating machinery or driving).

Fractures: Bone fractures have been associated with antidepressant treatment. Consider the possibility of a fragility fracture if an antidepressant-treated patient presents with unexplained bone pain, point tenderness, swelling, or bruising.

Ocular effects: May cause mild pupillary dilation which in susceptible individuals can lead to an episode of narrow-angle glaucoma..

Diabetes: Use with caution in patients with diabetes mellitus; may alter glucose regulation.

Seizure disorder: Use with caution in patients at risk of seizures, including those with a history of seizures, head trauma, brain damage, alcoholism, or concurrent therapy with medications which may lower seizure threshold.

Visual problems: Only some people are at risk for these problems. They may want to undergo an eye examination to see if they are at risk and receive preventative treatment if they are.

Not all antidepressant medicines prescribed for children are FDA approved for use in children. Talk to child’s healthcare provider for more information.

Antidepressant medicines may increase suicidal thoughts or actions in some children, teenagers, and young adults within the first few months of treatment