Procainamide hydrochloride, a Group 1A cardiac antiarrhythmic drug, Procainamide is a derivative of procaine with less CNS action 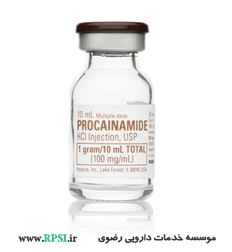 Procainamide is an agent indicated for production of local or regional anesthesia and in the treatment of ventricular tachycardia occurring during cardiac manipulation, such as surgery or catheterization, or which may occur during acute myocardial infarction, digitalis toxicity, or other cardiac diseases.

The mode of action of the antiarrhythmic effect of Procainamide appears to be similar to that of procaine and quinidine. Ventricular excitability is depressed and the stimulation threshold of the ventricle is increased during diastole. The sinoatrial node is, however, unaffected.

Positive result may occur with or without lupus erythematosus-like syndrome symptoms If a positive ANA titer develops, assess benefits vs risks of continuing procainamide

CAST was a long-term, multicenter, randomized, double-blind study in patients with asymptomatic non-life-threatening ventricular arrhythmias who had a myocardial infarction >6 days but <2 yr previously

Applicability of CAST results to other populations (eg, patients without recent MI) is uncertain

Agranulocytosis, bone marrow depression, leukopenia, neutropenia, aplastic/hypoplastic anemia, thrombocytopenia, & sequelae such as septicemia & septic shock have been reported at a rate of ~0.5%

If any of these hematologic disorders is identified, discontinue drug & initiate appropriate treatment

Blood counts usually return to normal within 1 month of discontinuation

Caution in patients with preexisting marrow failure or cytopenia

Concomitant use of digoxin, other class IA antiarrhythmics