Ritonavir is an HIV protease inhibitor that interferes with the reproductive cycle of HIV. Although it was initially developed as an independent antiviral agent, it has been shown to possess advantageous properties in combination regimens with low-dose ritonavir and other protease inhibitors.

It is now more commonly used as a booster of other protease inhibitors and is available in both liquid formulation and as capsules. 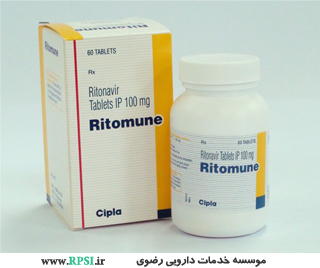 Ritonavic inhibits the HIV viral proteinase enzyme that normally cleaves the structural and replicative proteins that arise from major HIV genes, such as gag and pol. Gag encodes proteins involved in the core and the nucleocapsid, while pol encodes the the HIV reverse transcriptase, ribonuclease H, integrase, and protease. The pol-encoded proteins are initially translated in the form of a larger precursoe polypeptide, gag-pol, and needs to be cleaved by HIV protease to form other complement proteins . Ritonavir prevents the cleavage of the gag-pol polyprotein, which results in noninfectious, immature viral particles. Ritonavir is a potent inhibitor of cytochrome P450 CYP3A4 isoenzyme present both in the intestinal tract and liver.

It is a type II ligand that perfectly fits into the CYP3A4 active site cavity and irreversibly binds to the heme iron via the thiazole nitrogen, which decreases the redox potential of the protein and precludes its reduction with the redox partner, cytochrome P450 reductase. Ritonavir may also play a role in limiting cellular transport and efflux of other protease inhibitors via the P-glycoprotein and MRP efflux channels.

Ritonavir is a protease inhibitor with activity against Human Immunodeficiency Virus Type 1 (HIV-1). Protease inhibitors block the part of HIV called protease. HIV-1 protease is an enzyme required for the proteolytic cleavage of the viral polyprotein precursors into the individual functional proteins found in infectious HIV-1. Ritonavir binds to the protease active site and inhibits the activity of the enzyme.

This inhibition prevents cleavage of the viral polyproteins resulting in the formation of immature non-infectious viral particles. Protease inhibitors are almost always used in combination with at least two other anti-HIV drugs. Modern protease inhibitors require the use of low-dose ritonavir to boost pharmacokinetic exposure through inhibition of metabolism via the cytochrome enzyme pathway.

Absorption: variable, with or without food

Not typically used as sole protease inhibitor (PI), but as pharmacokinetic enhancer of other PIs, Indicated in combination with other antiretroviral agents for the treatment of HIV-infection

Use as booster with another protease inhibitor: 100-400 mg PO qDay or divided q12hr

Coadministration with sedative-hypnotics, antiarrhythmics, or ergot alkaloids may result in serious and/or life-threatening adverse events due to ritonavir’s effect on hepatic metabolism

Ritonavir inhibits CYP450 3A; drugs that are extensively metabolized by CYP3A and have high first pass metabolism are most susceptible to increased serum levels when coadministered