A first generation nonsteroidal selective estrogen receptor modulator (SERM) that is structurally related to tamoxifen. Like tamoxifen, it is an estrogen agonist for bone tissue and cholesterol metabolism but is antagonistic on mammary and uterine tissue. 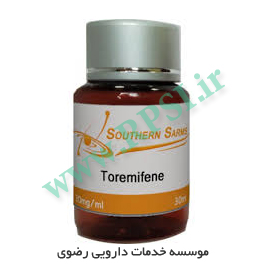 Toremifene is a nonsteroidal triphenylethylene derivative. Toremifene binds to estrogen receptors and may exert estrogenic, antiestrogenic, or both activities, depending upon the duration of treatment, animal species, gender, target organ, or endpoint selected.

The antitumor effect of toremifene in breast cancer is believed to be mainly due to its antiestrogenic effects, in other words, its ability to compete with estrogen for binding sites in the cancer, blocking the growth-stimulating effects of estrogen in the tumor. Toremifene may also inhibit tumor growth through other mechanisms, such as induction of apoptosis, regulation of oncogene expression, and growth factors.

Toremifene is an antineoplastic hormonal agent primarily used in the treatment of advanced breast cancer. Toremifene is a nonsteroidal agent that has demonstrated potent antiestrogenic properties in animal test systems.

The antiestrogenic effects may be related to its ability to compete with estrogen for binding sites in target tissues such as breast.

Prolongs QTc interval in a dose- and concentration-related manner

QT prolongation can result in Torsade de pointes, which may result in syncope, seizure, and/or death

Use birth control that does not have hormones in it like a condom. Do this for as long as you take toremifene.

If you are pregnant or you get pregnant while taking toremifene, call your doctor right away.