Osimertinib is an oral, third-generation epidermal growth factor receptor (EGFR) tyrosine kinase inhibitor (TKI) drug developed by AstraZeneca Pharmaceuticals. Its use is indicated for the treatment of metastatic non-small cell lung cancer (NSCLC) in cases where tumour EGFR expression is positive for the T790M mutation as detected by FDA-approved testing and which has progressed following therapy with a first-generation EGFR tyrosine kinase inhibitor.

Approximately 10% of patients with NSCLC have a rapid and clinically effective response to EGFR-TKIs due to the presence of specific activating EGFR mutations within the tumour cells. More specifically, deletions around the LREA motif in exon 19 and exon 21 L858R point mutations are correlated with response to therapy.

Development of third-generation EGFR-TKIs, such as osimertinib, has been in response to altered tumour resistance patterns following treatment and toxic side effects that impact patient quality of life. Treatment with first-generation EGFR-TKIs (gefitinib and erlotinib) has been associated with the development of resistance through activating mutations in the EGFR gene.

Second-generation EGFR-TKIs (afatinib and dacomitinib) were then developed to be more potent inhibitors, although their use is associated with increased toxicity through nonspecific targeting of wild-type EGFR. In contrast, third-generation inhibitors are specific for the gate-keeper T790M mutations which increases ATP binding activity to EGFR and result in poor prognosis for late-stage disease. Furthermore, osimertinib has been shown to spare wild-type EGFR during therapy, thereby reducing non-specific binding and limiting toxicity. 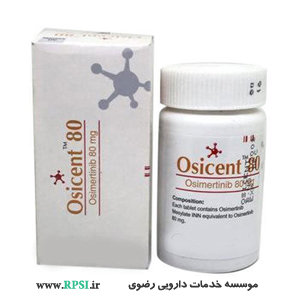 . As a third-generation tyrosine kinase inhibitor, osimertinib is specific for the gate-keeper T790M mutation which increases ATP binding activity to EGFR and results in poor prognosis for late-stage disease. Furthermore, osimertinib has been shown to spare wild-type EGFR during therapy, thereby reducing non-specific binding and limiting toxicity.

A pharmacokinetic/pharmacodynamic analysis suggested a concentration-dependent QTc interval prolongation of 14 msec (upper bound of two-sided 90% CI: 16 msec) at a dose of osimertinib 80 mg.

A pharmacokinetic/pharmacodynamic analysis suggested a concentration-dependent QTc interval prolongation of 14 msec (upper bound of two-sided 90% CI: 16 msec) at a dose of osimertinib 80 mg.

Osimertinib is metabolized to at least two pharmacologically active metabolites, AZ7550 and AZ5104, that circulate at approximately 10% of the concentration of the parent compound. Biochemical assays have shown that AZ7550 has similar potency and efficacy to osimertinib, while AZ5104 is more potent against mutant and wild-type EGFR. The main metabolic pathways are oxidation (predominantly by CYP3A) and dealkylation.

Osimertinib is primarily eliminated through excretion in the feces (68%), to a lesser extent through urine (14%), while only 2% is excreted unchanged.

May prolong QTc interval; monitor ECG and electrolytes in patients with a history or predisposition for QTc prolongation or in those who are taking medications that are known to prolong the QTc interval; withhold then restart at a reduced dose or permanently discontinue

Cardiomyopathy reported; assess LVEF before treatment and then every 3 months thereafter

You may take osimertinib with or without food.

To make swallowing easier, you may place the tablet in a glass with about 4 tablespoons of water. Stir until the tablet is mostly dissolved and drink this mixture right away. To make sure you get the entire dose, add 4 to 8 ounces of water to the same glass, swirl gently and drink right away.

While using osimertinib, you may need frequent blood tests. Your heart function may need to be checked using an electrocardiograph or ECG (sometimes called an EKG).

Osimertinib is usually given until your body no longer responds to the medication.