A drug that has anti-inflammatory, antipyretic, and analgesic activities. It is especially effective in the treatment of ankylosing spondylitis. It also is useful in rheumatoid arthritis and Reiter's syndrome (investigational indication). Although phenylbutazone is effective in gouty arthritis, risk/benefit considerations indicate that this drug should not be employed for this disease 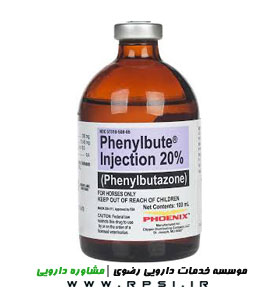 Phenylbutazone binds to and inactivates prostaglandin H synthase and prostacyclin synthase through peroxide (H2O2) mediated deactivation. The reduced production of prostaglandin leads to reduced inflammation of the surrounding tissues

Phenylbutazone is a synthetic, pyrazolone derivative. It is a nonhormonal anti-inflammatory, antipyretic compound useful in the management of inflammatory conditions. The apparent analgesic effect is probably related mainly to the compound's anti-inflammatory properties and arise from its ability to reduce production of prostaglandin H and prostacyclin. Prostaglandins act on a variety of cells such as vascular smooth muscle cells causing constriction or dilation, on platelets causing aggregation or disaggregation and on spinal neurons causing pain. Prostacylcin causes vascular constriction platelet disaggregation

Phenylbutazone is rapidly and completely absorbed from the GI tract or the rectum. More than 98% of the drug is bound to plasma proteins. In humans, phenylbutazone undergoes extensive biotransformation. Hydroxylation of the phenyl rings or the butyl side chain and glucuronidation are the most significant primary reactions. Active metabolites with long plasma half-lives are formed. Half-lives of phenylbutazone in several species are shown in Table 4-3. This drug, unlike salicylate, is slowly eliminated from ruminants. The reason for this is not known (Davis, 1983). As previously mentioned, dosing intervals must be adjusted relative to the half-life of the drug: the longer the half-life, the greater the dosing interval. In turn, the time taken to reach therapeutic blood concentration is lengthened.

For the treatment of backache and ankylosing spondylitis

serious hepatic, renal or cardiac pathology, or those with a history of blood dyscrasia

GI ulceration, bone marrow depression, rashes, malaise, blood dyscrasias, diminished renal blood flow
Injection site reactions can occur if blood leaks back at the injection site. Injectable phenylbutazone is very irritating to tissue if any leaks out of the vein.