Lusedra (fospropofol disodium) Injection is a proprietary water-soluble prodrug of propofol that, after intravenous injection, is converted by alkaline phosphatase enzymes in the body into propofol. Lusedra is an intravenous sedative-hypnotic agent indicated for monitored anesthesia care (MAC) sedation in adult patients undergoing diagnostic or therapeutic procedures. 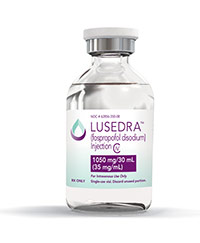 After in-vivo conversion of fospropofol into propofol by endothelial alkaline phosphatase, propofol crosses the blood-brain barrier, binds to GABA-A receptors and acts as an agonist. By binding to GABA-A receptor, it will cause an increase in chloride conductance, thus inhibiting the firing of new action potentials in the post-synaptic neuron

Adequate sedation achieved after 7 minutes with a IV bolus dose of 10mg/kg. It takes 21-45 minutes for patients to recover for fospropopol-induced sedation. Following an intravenous bolus administration of 6 mg/kg in a healthy subject, the pharmacokinetic parameters of fospropofol are as follows: Cmax = 78.7 μg/mL; Tmax = 4 minutes; AUC(0-∞) = 19.0 μg ⋅ h/mL;

Both fospropofol and its active metabolite propofol are highly protein bound (approximately 98%), primarily to albumin. Fospropofol does not affect the binding of propofol to albumin.

Fospropofol is metabolized into propofol, formaldehyde, and phosphate by endothelial alkaline phosphatase. The metabolite, formaldehyde, is quickly oxidized into formic acid by glutathione dependent and independent dehydrogenases and erythrocytes. Excess formic acid is eliminated via oxidation to carbon dioxide through the tetrahydrofolate pathway. Propofol is further metabolized into propofol glucuronide, quinol-4-sulfate, quinol-1-fluronide, and quinol-4-glucuronide. The cytochrome P450 enzyme system is not involved with the metabolism of fospropofol.

Chiefly eliminated by hepatic conjugation to inactive metabolites which are excreted by the kidney. There is negligible renal elimination of unchanged fospropofol (<0.02%).

When given to a patient, the half-lives are as follows: Fospropofol = 0.81 hours; Propofol metabolite = 1.13 hours

for patients who are ≥65 years of age or who have severe systemic disease (ASA P3 or P4): 75 % of the standard dosing regimen

Most common adverse reactions (> 20 %) are paresthesia and pruritus.

Paresthesias (including burning, tingling, stinging) and/or pruritus, usually manifested in the perineal region are frequently experienced upon injection of the initial dose of Lusedra. Inform the patient that these sensations are typically mild to moderate in intensity, last a short time, and require no treatment.

US FDA pregnancy category B: Animal reproduction studies have failed to demonstrate a risk to the fetus and there are no adequate and well-controlled studies in pregnant women.