A butyrophenone with general properties similar to those of haloperidol. It is used in conjunction with an opioid analgesic such as fentanyl to maintain the patient in a calm state of neuroleptanalgesia with indifference to surroundings but still able to cooperate with the surgeon. It is also used as a premedicant, as an antiemetic, and for the control of agitation in acute psychoses. 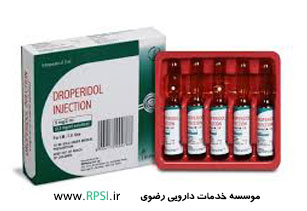 The exact mechanism of action is unknown, however, droperidol causes a CNS depression at subcortical levels of the brain, midbrain, and brainstem reticular formation. It may antagonize the actions of glutamic acid within the extrapyramidal system.

It may also inhibit cathecolamine receptors and the reuptake of neurotransmiters and has strong central antidopaminergic action and weak central anticholinergic action. It can also produce ganglionic blockade and reduced affective response. The main actions seem to stem from its potent Dopamine(2) receptor antagonism with minor antagonistic effects on alpha-1 adrenergic receptors as well.

Droperidol produces marked tranquilization and sedation. It allays apprehension and provides a state of mental detachment and indifference while maintaining a state of reflex alertness. It lowers the incidence of nausea and vomiting during surgical procedures and provides antiemetic protection in the postoperative period. Droperidol potentiates other CNS depressants.

It produces mild alpha-adrenergic blockade, peripheral vascular dilatation and reduction of the pressor effect of epinephrine. It can produce hypotension and decreased peripheral vascular resistance and may decrease pulmonary arterial pressure (particularly if it is abnormally high). It may reduce the incidence of epinephrine-induced arrhythmias, but it does not prevent other cardiac arrhythmias.

Initial: No more than 2.5 mg IV/IM; additional doses of 1.25 mg may be given if benefit outweighs potential risk

Not to exceed 0.1 mg/kg IV/IM, additional dose (no more than 2.5 mg) may be given ONLY IF benefit outweighs potential risk

May cause potentially fatal QT interval prolongation/torsades de pointes at or below recommended doses; should be used only in patients who have failed to respond to other drugs

Use as sedative or anesthesia adjunct no longer recommended

Shares the toxic potentials of phenothiazines

Check blood pressure and heart rate as the doctor has told you. Talk with the doctor.