Rasagiline is an irreversible inhibitor of monoamine oxidase and is used as a monotherapy in early Parkinson's disease or as an adjunct therapy in more advanced cases. 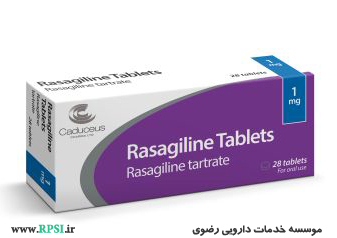 The precise mechanisms of action of rasagiline is unknown. One mechanism is believed to be related to its MAO-B inhibitory activity, which causes an increase in extracellular levels of dopamine in the striatum.

Rasagiline is a propargylamine and an irreversible inhibitor of monoamine oxidase (MAO). MAO, a flavin-containing enzyme, regulates the metabolic degradation of catecholamines and serotonin in the CNS and peripheral tissues. It is classified into two major molecular species, A and B, and is localized in mitochondrial membranes throughout the body in nerve terminals, brain, liver and intestinal mucosa. MAO-A is found predominantly in the GI tract and liver, and regulates the metabolic degradation of circulating catecholamines and dietary amines.

MAO-B is the major form in the human brain and is responsible for the regulation of the metabolic degradation of dopamine and phenylethylamine. At the recommended therapeutic doses, Rasagiline was also shown to be a potent and irreversible inhibitor of MAO-B in platelets.

Onset of action: Within 1 hr