Amobarbital  is a barbiturate with hypnotic and sedative properties (but not antianxiety). 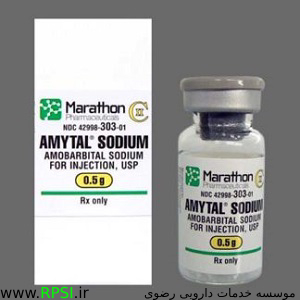 Amobarbital (like all barbiturates) works by binding to the GABAA receptor at either the alpha or the beta sub unit. These are binding sites that are distinct from GABA itself and also distinct from the benzodiazepine binding site.

Like benzodiazepines, barbiturates potentiate the effect of GABA at this receptor. Amobarbital depresses the sensory cortex by interfering with transmission of impulses from thalamus. This results in decreased motor activity, altered cerebellar function, drowsiness, sedation, and hypnosis

Acts throughout the CNS as a nonselective depressant with an intermediate onset and duration of action. Particularly sensitive to this drug is the mesencephalic reticular activating system, which controls CNS arousal. Drug decreases both presynaptic and postsynaptic membrane excitability by facilitating the action of GABA.

Onset of Action: Within 5 minutes