An indandione that has been used as an anticoagulant. Phenindione has actions similar to warfarin, but it is now rarely employed because of its higher incidence of severe adverse effects. 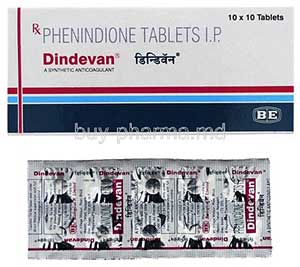 Phenindione thins the blood by antagonizing vitamin K which is required for the production of clotting factors in the liver. Anticoagulants such as Phenindione have no direct effect on an established thrombus, nor do they reverse ischemic tissue damage (damage caused by an inadequate blood supply to an organ or part of the body). However, once a thrombus has occurred, the goal of anticoagulant treatment is to prevent further extension of the formed clot and prevent secondary thromboembolic complications which may result in serious and possibly fatal sequelae

From the third day of treatment, the doctor will adjust your dose up or down depending on the results of the blood test which will be performed at the start and at regular intervals during your treatment.

Phenindione  Tablets are not suitable for use in children.