Diltiazem is a calcium channel blocker. It works by relaxing the muscles of your heart and blood vessels. Diltiazem is used to treat hypertension (high blood pressure), angina (chest pain), and certain heart rhythm disorders. 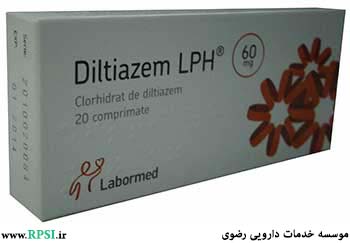 Diltiazem produces its antihypertensive effect primarily by relaxation of vascular smooth muscle and the resultant decrease in peripheral vascular resistance. Diltiazem has been shown to produce increases in exercise tolerance, probably due to its ability to reduce myocardial oxygen demand. This is accomplished via reductions in heart rate and systemic blood pressure at submaximal and maximal work loads. Diltiazem has been shown to be a potent dilator of coronary arteries, both epicardial and subendocardial. Spontaneous and ergonovine-induced coronary artery spasm are inhibited by diltiazem.

Diltiazem is well absorbed from the gastrointestinal tract and is subject to an extensive first-pass effect, giving an absolute bioavailability (compared to intravenous administration) of about 40%. Diltiazem undergoes extensive metabolism in which only 2% to 4% of the unchanged drug appears in the urine.

1-The drug should be used with caution in patients with impaired renal or hepatic function. 2-Should a dermatologic reaction persist, the drug should be discontinued. 3-Mild elevations of transaminases with and without concomitant elevation in alkaline phosphatase and bilirubin have been observed in clinical studies. 4-Concomitant use of diltiazem with beta-blockers or digitalis may result in additive effects on cardiac conduction 5-Worsening of congestive heart failure has been reported in patients with preexisting impairment of ventricular function. 6-Decreases in blood pressure associated with diltiazem therapy may occasionally result in symptomatic hypotension.

1-Grapefruit and grapefruit juice may interact with diltiazem and lead to unwanted side effects. Discuss the use of grapefruit products with your doctor.. 2- Diltiazem may impair your thinking or reactions. Be careful if you drive or do anything that requires you to be alert.. 3-Take the missed dose as soon as you remember. Skip the missed dose if it is almost time for your next scheduled dose. Do not take extra medicine to make up the missed dose. 4-Avoid drinking alcohol while taking diltiazem. 5-Avoid taking herbal supplements containing St. John's wort at the same time you are taking diltiazem.