Diclofenac is a nonsteroidal anti-inflammatory drug (NSAID). This medicine
works by reducing substances in the body that cause pain and inflammation. Diclofenac is used to treat mild to moderate pain, or signs and symptoms of osteoarthritis or rheumatoid arthritis. 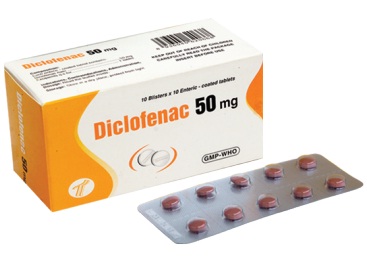 The mechanism of action of Diclofenac Sodium Extended-release Tablets, like that of other NSAIDs, is not completely understood but may be related to prostaglandin synthetase inhibition.

Completely absorbed from the gastrointestinal tract. Diclofenac is more than 99% bound to human serum proteins, primarily to albumin.
Metabolism:Hepatic Approximately 65% of the dose is excreted in the urine and approximately 35% in the bile as conjugates of unchanged Diclofenac plus metabolites.

hypersensitivity to drug or its components. , In the setting of coronary artery bypass graft (CA

1-To minimize the potential risk for an adverse CV event in patients treated with an NSAID, the lowest effective dose should be used for the shortest duration possible.
2-Patients and physicians should remain alert for signs and symptoms of GI ulceration and bleeding during NSAID therapy and promptly initiate additional evaluation and treatment if a serious GI adverse event is suspected.
3-If Diclofenac Sodium Extended-release Tablets therapy must be initiated, close monitoring of the patient's renal function is advisable.
4-Of the markers of hepatic function, ALT (SGPT) is recommended for the monitoring of liver injury.
5-NSAIDs, including Diclofenac Sodium Extended-release Tablets, can cause serious skin adverse events such as exfoliative dermatitis, Stevens-Johnson Syndrome (SJS), and toxic epidermal necrolysis (TEN), which can be fatal.

1-In late pregnancy, as with other NSAIDs, Diclofenac Sodium Extended-release Tablets should be avoided because it will cause premature closure of the ductus arteriosus.
2-Take with food to reduce irritation.