A appetite depressant considered to produce less central nervous system disturbance than most drugs in this therapeutic category. It is also considered to be among the safest for patients with hypertension. 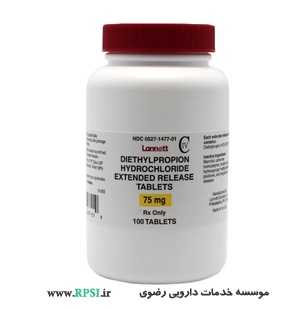 Diethylpropion is an amphetamine that stimulates neurons to release or maintain high levels of a particular group of neurotransmitters known as catecholamines; these include dopamine and norepinephrine. High levels of these catecholamines tend to suppress hunger signals and appetite.
Diethylpropion (through catecholamine elevation) may also indirectly affect leptin levels in the brain. It is theorized that diethylpropion can raise levels of leptin which signal satiety.
It is also theorized that increased levels of the catecholamines are partially responsible for halting another chemical messenger known as neuropeptide Y. This peptide initiates eating, decreases energy expenditure, and increases fat storage.

Diethylpropion is a sympathomimetic stimulant drug marketed as an appetite suppressant. Chemically, it is the N,N-diethyl analog of cathinone. Its mechanism of action is similar to other appetite suppressants such as sibutramine, phentermine and dextroamphetamine.

Follow all directions on your prescription label. Your doctor may occasionally change your dose. Do not use this medicine in larger or smaller amounts or for longer than recommended.

Diethylpropion may be habit-forming. Never share diethylpropion with another person, especially someone with a history of drug abuse or addiction. Keep the medication in a place where others cannot get to it. Selling or giving away this medicine is against the law.

The immediate-release diethylpropion tablet is usually taken three times a day before meals.

The extended-release diethylpropion tablet is usually taken once a day midmorning.

Tell your doctor if you do not lose at least 4 pounds after taking the medicine for 4 weeks along with a low calorie diet.

Do not crush, chew, or break an extended-release tablet. Swallow it whole.

If you need surgery, tell the surgeon ahead of time that you are using diethylpropion. You may need to stop using the medicine for a short time.

Do not stop using diethylpropion suddenly after long-term use, or you could have unpleasant withdrawal symptoms. Ask your doctor how to safely stop using this medicine.