fenfluramine hydrochloride is an anorectic drug for oral administration.Fenfluramine was withdrawn from the U.S. market in 1997 after reports of heart valve disease and pulmonary hypertension, including a condition known as cardiac fibrosis. 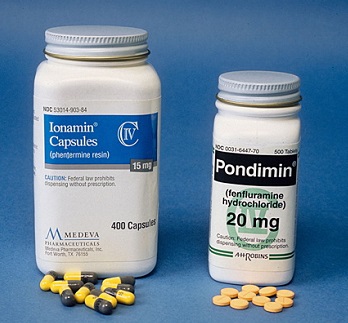 Fenfluramine binds to the serotonin reuptake pump. This causes inhbition of serotonin uptake and release of serotonin. The increased levels of serotonin lead to greater serotonin receptor activation which in turn lead to enhancement of serotoninergic transmission in the centres of feeding behavior located in the hypothalamus. This suppresses the appetite for carbohydrates.

Fenfluramine is widely distributed in almost all body tissues. It is soluble in lipids and crosses the blood-brain barrier

For the management of exogenous obesity as a short-term (a few weeks) adjunct in a regimen of weight reduction based on caloric restriction.

The usual dose is one 20 mg tablet three times daily before meals. Depending on the degree of effectiveness and side effects, the dosage may be increased at weekly intervals by one tablet (20 mg) daily until a maximum dosage of two tablets three times daily is attained. Total dosage of fenfluramine should not exceed 120 mg per day.

The most common adverse reactions of fenfluramine are drowsiness, diarrhea, and dry mouth.

Ergotamine-C , Sibutramine , isocarboxazid , Tapentadol , Amphetamine , Phenylpropanolamine , Dolasetron , Palonosetron , Doxapram , Desvenlafaxine , Dexfenfluramine , Ramucirumab , Levomilnacipran , 5-hydroxytryptophan , Vernakalant
Fenfluramine may increase slightly the effect of antihypertensive drugs, e.g., guanethidine, methyldopa, reserpine.
Other CNS depressant drugs should be used with caution in patients taking fenfluramine, since the effects may be additive.
A fatal cardiac arrest has been reported shortly after the induction of anesthesia in a patient who had been taking fenfluramine prior to surgery. Fenfluramine may have a catecholamine-depleting effect when administered for prolonged periods of time; therefore, potent anesthetic agents should be administered with caution to patients taking fenfluramine. If general anesthesia cannot be avoided, full cardiac monitoring and facilities for instant resuscitative measures are a minimum necessity.

When tolerance to the "anorectic" effect develops, the maximum recommended dose should not be exceeded in an attempt to increase the effect; rather, the drug should be discontinued.

Caution should be exercised in prescribing fenfluramine for patients with a history of mental depression. Further depression of mood may become evident while the patient is on fenfluramine or following withdrawal of fenfluramine. Symptoms of depression occurring immediately following abrupt withdrawal can be readily controlled by reinstituting FenfluramineHCl, followed by a gradual tapering off of the daily dose.

Fenfluramine may impair the ability of the patient to engage in potentially hazardous activities such as operating machinery or driving a motor vehicle (see ADVERSE REACTIONS); the patient should be cautioned accordingly. Patient should also be advised to avoid alcoholic beverages while taking FenfluramineHCl.