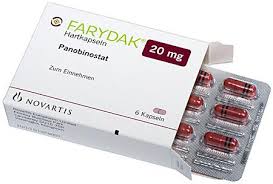 Panobinostat is a deacetylase (DAC) inhibitor. DACs, also known as histone DACs (HDAC), are responsible for regulating the acetylation of about 1750 proteins in the body; their functions are involved in many biological processes including DNA replication and repair, chromatin remodelling, transcription of genes, progression of the cell-cycle, protein degradation and cytoskeletal reorganization. In multiple myeloma, there is an overexpression of DAC proteins. Panobinostat inhibits class I (HDACs 1, 2, 3, 8), class II (HDACs 4, 5, 6, 7, 9, 10) and class IV (HDAC 11) proteins. Panobinostat's antitumor activity is believed to be attributed to epigenetic modulation of gene expression and inhibition of protein metabolism. Panobinostat also exhibits cytotoxic synergy with bortezomib, a proteasome inhibitor concurrently used in treatment of multiple myeloma.

Panobinostat was extensively metabolized to 77 metabolites. Unchanged panobinostat recovered in urine and feces was 2% and 3%, respectively. Primary metabolic pathways of panobinostat are reduction, hydrolysis, oxidation, and glucuronidation processes. CYP and non-CYP enzymes were found to play significant role in metabolism, CYP2D6 and CYP2C19 playing minor roles

It is used to treat multiple myeloma.

There are no contraindications listed in the manufacturer’s labeling.

The most common ones that require medical care:
Abdominal or stomach pain or tenderness - black stools - bloating or swelling of the face, arms, hands, lower legs or feet - colored stools - confusion - cough or sore throat - dark or bloody urine - loss of appetite
Decreased number or frequency of urination - dizziness, fainting, or dizziness, especially when getting up suddenly from lying down or sitting - heart rate or rapid, irregular, throbbing, or racing
Fever, chills or sweating-Headache-Increased thirst-Itching or skin rash-Loss of appetite-Back or side pain-Muscle spasm or torsion-Nausea or vomiting-Nervousness-Painful or difficult urination-Red spots Specify on the skin - palpitations in the ears - rapid and frequent breathing - seizures
Severe diarrhea - Slow or fast heartbeat - Swelling of the face, fingers, toes or feet - Tingling in the hands or feet - Breathing - Wounds, sores or white spots in the mouth - Unusual bleeding or bruising - Fatigue or unusual weakness - Increased Or unusual weight loss - yellow eyes or skin

Most common do not require medical attention:
Acidic or Sour Stomach-Biting or Passing-Changing or Losing Taste-Depression-Dry Mouth
Hair Loss - Heartburn or Indigestion - Ignition or Abdominal Sound - Fatigue or lethargy
Redness of the skin

Forbidden
Animal studies have shown evidence of jaundice and maternal toxicity, including death. Animal data also suggest that the drug may impair male and female fertility. There is no controlled data on human pregnancy.
It should be avoided during pregnancy because this drug can harm the fetus. Also, the possibility of pregnancy should be ruled out before starting treatment with this drug.

Discontinue breastfeeding or discontinue the drug, taking into account the importance of the drug to the mother.