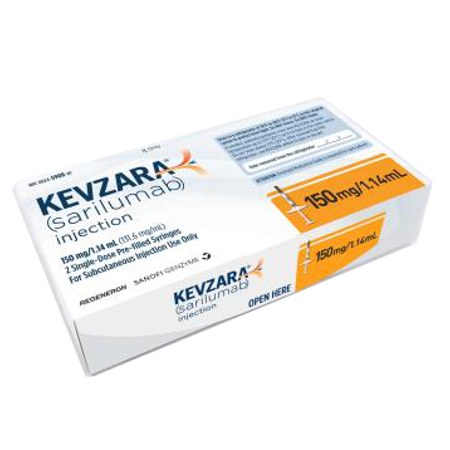 Sarilumab is a human recombinant IgG1 antibody that binds to both forms of interleukin 6 receptors (IL-6R), thus inhibiting the IL-6-mediated signaling. IL-6 is known to be a pleiotropic cytokine that activates immune cells (T and B cells), as well as hepatocytes for the release of acute phase proteins like CRP, serum amyloid A and fibrinogen which are biomarkers of RA activity. IL-6 is also found in synovial fluid and plays a major role in the pathological inflammation and joint destruction features of RA. Thus, it is used for the treatment of RA due to its ability to inhibit intra-articular and systemic IL-6 signaling

Single-dose subcutaneous administration of Sarilumab produced a rapid reduction of CRP levels, leading to normal levels after two weeks of treatment. Peak reduction in the absolute neutrophile count was observed after 3 to 4 days of treatment followed by a recovery to baseline levels. It is observed a decrease in fibrinogen and serum amyloid A as well as an increase in hemoglobin and serum albumin.

Excretion: Monoclonal antibodies are not eliminated via renal or hepatic pathways

Visually inspect syringe for particulate matter and discoloration prior to administration

Solution should be clear and colorless to pale yellow; do not use if the solution is cloudy, discolored, or contains particles, or if any part of the prefilled syringe appears to be damaged

Rotate injection sites with each injection; do not inject into skin that is tender, damaged, or has bruises or scars

Do not rub the injection site

Monoclonal antibodies are increasingly transported across the placenta as pregnancy progresses, with the largest amount transferred during the third trimester

Consider the developmental and health benefits of breastfeeding along with the mother’s clinical need for the drug, and any potential adverse effects on the breastfed infant from the drug or from the underlying maternal condition