Flurbiprofen is a nonsteroidal anti-inflammatory drug (NSAID). Flurbiprofen works by reducing hormones that cause inflammation and pain in the body. 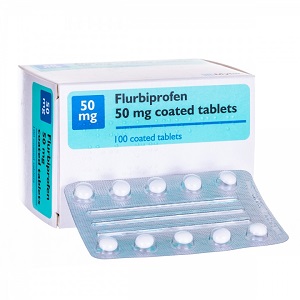 Flurbiprofen tablets are indicated for the acute or long-term symptomatic treatment of rheumatoid arthritis, osteorarthritis and anklosing spondylitis. It may also be used to treat pain associated with dysmenorrhea and mild to moderate pain accompanied by inflammation (e.g. bursitis, tendonitis, soft tissue trauma). Topical ophthalmic formulations may be used pre-operatively to prevent intraoperative miosis

Hypersensitivity to flurbiprofen or any component of the formulation; history of asthma, urticaria, or allergic-type reactions after taking aspirin or other NSAIDs.

NSAIDs cause an increased risk of serious cardiovascular thrombotic events, including myocardial infarction and stroke, which can be fatal. This risk may occur early in treatment and may increase with duration of use. NSAIDs cause an increased risk of serious gastrointestinal (GI) adverse events including bleeding, ulceration, and perforation of the stomach or intestines, which can be fatal. These events can occur at any time during use and without warning symptoms. Elderly patients and patients with a prior history of peptic ulcer disease and/or GI bleeding are at greater risk for serious GI events.

US FDA pregnancy category: Not assigned.