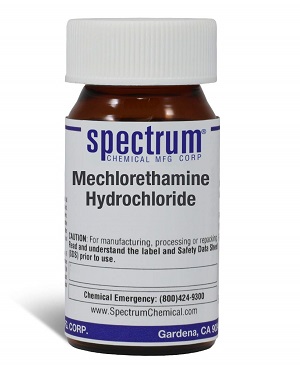 Alkylating agents work by three different mechanisms: 1) attachment of alkyl groups to DNA bases, resulting in the DNA being fragmented by repair enzymes in their attempts to replace the alkylated bases, preventing DNA synthesis and RNA transcription from the affected DNA, 2) DNA damage via the formation of cross-links (bonds between atoms in the DNA) which prevents DNA from being separated for synthesis or transcription, and 3) the induction of mispairing of the nucleotides leading to mutations. Mechlorethamine is cell cycle phase-nonspecific.

Mechlorethamine also known as mustine, nitrogen mustard, and HN2, is the prototype anticancer chemotherapeutic drug. Successful clinical use of mechlorethamine gave birth to the field of anticancer chemotherapy. The drug is an analogue of mustard gas and was derived from toxic gas warfare research. Mechlorethamine is a nitrogen mustard alkylating agent. Alkylating agents work by three different mechanisms all of which achieve the same end result - disruption of DNA function and cell death.

Partially absorbed following intracavitary administration, most likely due to rapid deactivation by body fluids. When it is topically administered, systemic exposure was undetectable.

Undergoes rapid chemical transformation and combines with water or reactive compounds of cells, so that the drug is no longer present in active form a few minutes after administration.