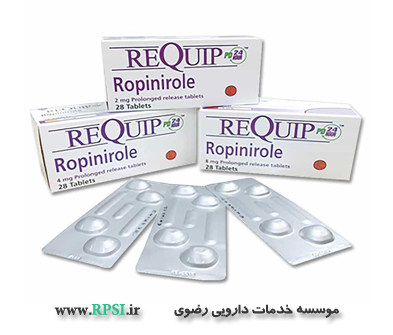 Ropinirole is thought to work by stimulating dopamine receptors in the brain, although its precise mechanism of action is unknown.
Parkinson's Disease is due to a deficiency in dopamine .

patient who has experienced angioedema

Falling Asleep during Activities of Daily Living and Somnolence .
Patients treated with Ropinirole tablets have reported falling asleep while engaged in activities of daily living, including driving or operating machinery, which sometimes resulted in accidents.
• Syncope
Syncope, sometimes associated with bradycardia, was observed in association with treatment with Ropinirole in both patients with Parkinson’s disease and patients with RLS.
• Hypotension/Orthostatic Hypotension
Patients with Parkinson’s disease may have impaired ability to respond normally to a fall in blood pressure after standing from lying down or seated position .
• Dyskinesia
Ropinirole tablets may cause or exacerbate pre-existing dyskinesia in patients treated with L-dopa for Parkinson’s disease .
• Impulse Control/Compulsive Behaviors
Case reports suggest that patients can experience intense urges to gamble, increased sexual urges, intense urges to spend money, binge or compulsive eating, and/or other intense urges .
• Melanoma
Epidemiological studies have shown that patients with Parkinson’s disease have a higher risk (2- to approximately 6-fold higher) of developing melanoma than the general population .