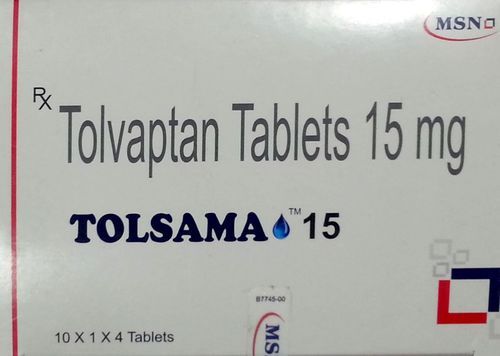 Tolvaptan is a selective and competitive arginine vasopressin receptor 2 antagonist. Vasopressin acts on the V2 receptors found in the walls of the vasculature and luminal membranes of renal collecting ducts. By blocking V2 receptors in the renal collecting ducts, aquaporins do not insert themselves into the walls thus preventing water absorption. This action ultimately results in an increase in urine volume, decrease urine osmolality, and increase electrolyte-free water clearance to reduce intravascular volume and an increase serum sodium levels. Tolvaptan is especially useful for heart failure patients as they have higher serum levels of vasopressin

Urine volume and fluid intake increase in a dose dependent manner which results in overall negative fluid balance in patients taking tolvaptan. Increases in serum sodium and osmolality can be observed 4-8 hours post-administration and is maintained for 24 hours. The magnitude of serum sodium and osmolality change increases with escalating doses. Furthermore, a decrease in urine osmolality and increase in free water clearance can be observed 4 hours after post-administration of tolvaptan. The affinity for V2 receptors is 29x greater than that of V1a receptors and does not have any appreciable affinity for V2 receptors

Absolute bioavailability: Unknown; at least 40% of the dose is absorbed as tolvaptan or metabolites

Eliminated entirely by nonrenal routes and mainly, if not exclusively, metabolized by CYP3A

Indicated for adults with clinically significant euvolemic or hypervolemic hyponatremia (serum sodium <125 mEq/L or less marked hyponatremia that is symptomatic and has resisted correction with fluid restriction), including patients with heart failure, cirrhosis, and SIADH

Maintenance: May increase to 30 mg qDay after at least 24 hr to achieve the optimal serum sodium level; not to exceed 60 mg/day

Not to exceed 30 days of treatment

Patients may down-titrate based on tolerability

Hypersensitivity , Anuria, , Coadministration with ketoconazole and itraconazol , Concurrent use of strong CYP3A inducers

Hypernatremia, hypovolemia, and/or dehydration; encourage patient to drink whenever thirsty

May take with or without food

Tolvaptan is present in rat milk

Because of the potential for serious adverse reactions, including liver toxicity, electrolyte abnormalities (eg, hypernatremia), hypotension, and volume depletion in breastfed infants, advise women not to breastfeed during treatment