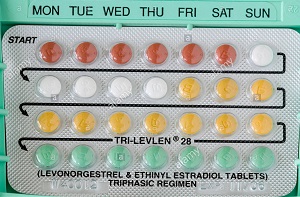 Synthetic progestin, ovulation is inhibited from a negative feedback mechanism on hypothalamus, leading to reduced secretion of FSH and LH

Ethinyl estradiol: Metabolized in liver by CYP3A4 to estriol and estrone

liver failure , renal failure , Hypersensitivity to this drug , acute arterial thrombi and embolism , Coronary Artery Disease (CAD , the acute treatment of migraine with or without aura in adults , adrenal insufficiency

Risk of VTE is highest during first year of use of a COCs and when restarting oral contraception after a break of 4 weeks or longer; risk of thromboembolic disease due to COCs gradually disappears after COC use is discontinued; use of COCs increases risk of arterial thromboses that result in strokes and myocardial infarctions, especially in women with other risk factors for these events; COCs have been shown to increase both relative and attributable risks of cerebrovascular events (thrombotic and hemorrhagic strokes); risk increases with age, particularly in women over 35 years of age who smoke

Discontinue therapy if an arterial thrombotic event or venous thromboembolic (VTE) event occurs; if feasible, stop therapy at least 4 weeks before and through 2 weeks after major surgery or other surgeries known to have an elevated risk of VTE as well as during and following prolonged immobilization; initiate therapy no earlier than 4 weeks after delivery in women who are not breastfeeding; risk of postpartum VTE decreases after third postpartum week, whereas risk of ovulation increases after third postpartum week

Increased risk of cervical cancer with oral contraceptive use, however, human papillomavirus (HPV) remains primary risk factor for this cancer

Increased risk of liver cancer with oral contraceptive use; risk increases with duration of use

Retinal thrombosis associated with use of oral contraceptives that may lead to partial or complete loss of vision reported; oral contraceptives should be discontinued if there is unexplained partial or complete loss of vision; onset of proptosis or diplopia; papilledema; or retinal vascular lesions; appropriate diagnostic and therapeutic measures should be undertaken immediately

Increased risk of myocardial infarction attributed to oral contraceptive use; risk is primarily in smokers or women with other underlying risk factors for coronary-artery disease such as hypertension, hypercholesterolemia, morbid obesity, and diabetes

An increased risk of venous thromboembolic and thrombotic disease associated with use of oral contraceptives is well established; the excess risk is highest during the first year a woman ever uses a combined oral contraceptive

In women with hereditary angioedema, exogenous estrogens may induce or exacerbate symptoms of angioedema

Chloasma may occasionally occur, especially in women with a history of chloasma gravidarum. Women with a tendency to chloasma should avoid exposure to the sun or ultraviolet radiation while receiving therapy

Oral contraceptives have been shown to increase both relative and attributable risks of cerebrovascular events (thrombotic and hemorrhagic strokes), although, in general, risk is greatest among older (>35 years), hypertensive women who also smoke

Not for use in women with liver disease, such as acute viral hepatitis or severe (decompensated) cirrhosis of liver; acute or chronic disturbances of liver function may necessitate discontinuation of COC use until markers of liver function return to normal and COC causation has been excluded; discontinue therapy if jaundice develops

A decline in serum high-density lipoproteins (HDL) has been reported with many progestational agents; a decline in serum high-density lipoproteins has been associated with an increased incidence of ischemic heart disease; women who are being treated for hyperlipidemias should be followed closely if they elect to use oral contraceptives; some progestogens may elevate LDL levels and may render control of hyperlipidemias more difficult; nonhormonal contraception should be considered in women with uncontrolled dyslipidemias; persistent hypertriglyceridemia may occur; elevations of plasma triglycerides may lead to pancreatitis and other complications

Onset or exacerbation of migraine or development of headache with new pattern that is recurrent, persistent, or severe requires discontinuation of oral contraceptives and evaluation of the cause

Ectopic as well as intrauterine pregnancy may occur in contraceptive failures

If a woman receiving therapy develops new headaches that are recurrent, persistent, or severe, evaluate cause and discontinue therapy if indicated; consider discontinuation in case of increased frequency or severity of migraine during COC use (which may be prodromal of a cerebrovascular event)

If bleeding persists or occurs after previously regular cycles, check for causes such as pregnancy or malignancy; if pathology and pregnancy are excluded, bleeding irregularities may resolve over time or with a change to a different contraceptive product

Women receiving therapy may experience amenorrhea, absence of withdrawal bleeding, even if they are not pregnant; if scheduled (withdrawal) bleeding does not occur, consider possibility of pregnancy if patient has not adhered to prescribed dosing schedule (missed one or more active tablets or started taking them on a day later than she should have); consider possibility of pregnancy at time of first missed period and take appropriate diagnostic measures; if patient has adhered to prescribed regimen and misses two consecutive periods, rule out pregnancy

There is little or no increased risk of birth defects in women who inadvertently use combination oral contraceptives during early pregnancy; epidemiologic studies and meta-analyses have not found an increased risk of genital or non-genital birth defects (including cardiac anomalies and limb-reduction defects) following exposure to low dose combination oral contraceptives prior to conception or during early pregnancy

Advise nursing mother to use other forms of contraception, when possible, until she has weaned her child; combination oral contraceptives can reduce milk production in breastfeeding mothers; this is less likely to occur once breastfeeding is well established; however, it can occur at any time in some women; small amounts of oral contraceptive steroids and/or metabolites are present in breast milk